On 7th of June 2022 we created a proposal to reduce minimum staking time for expanding governance participation. The community response for the proposal has been great and very engaging. The post received 180 replies with passionate arguments for both for and against the proposal. Overall sentiment from the community was positive and several community members believe this proposal will benefit the ICP ecosystem. This proposal also addresses the benefits of staking of ICP directly on NNS for more effective governance and value creation.

Let’s take a closer look at few suggestions from the community members and our take on them:

For the new proposal we propose to change the minimum dissolve delay to 30 days instead of 7 days. Here is the breakdown of staked neurons from 0 to 6 months dissolve delay

There were some concerns from the community about security especially a 51% attack if dissolve delay changes to 7 days. While we think it is not a fair argument (as discussed above), we feel that the new proposed 30 days dissolve delay completely eliminates this issue as well.

The presented proposal is our hypothesis on what could drive the maximum impact. Based on our discussions with various ICP holders, we found that there are several people that are sitting on the sidelines due to the 6 month minimum lockup requirement. We feel shortening the duration will enable them to get some real skin in the game when they start to see accrued rewards. Staking 1 ICP does not have the same impact as the accrued rewards are not that significant in value. The eventual goal is about giving people more flexibility to choose with a lower barrier to entry.

Here is the updated proposal: 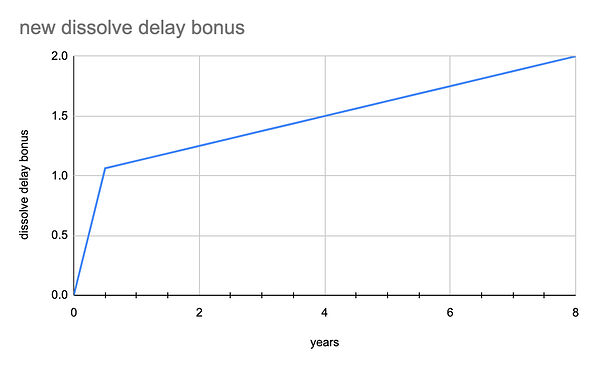 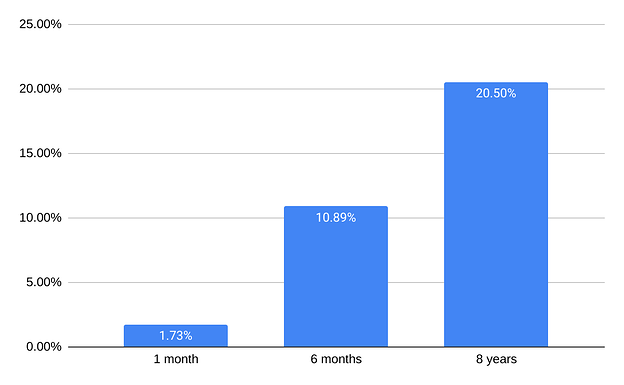 With respect to a 51% attack on the voting power of the internet computer, we believe that the proposed change is not relevant. If an attacker has 51% of the voting power, then also the minimum dissolve delay can be adjusted. Thus an attacker would likely stake for 8 years (instead of staking for a shorter period) receive a dissolve delay bonus of 2 and then attempt to change the rules.

With respect to the implementation, we consider this to be a security critical feature as it has an impact on voting rewards and thus the minting of ICP. Therefore it is planned to be reviewed with DFINITY’s security team.

I am Nikhil Ranjan working as a Senior Developer Relations Engineer at DFINITY. I am focusing on DEFI and Tokenization on ICP.

I would like to see the option in the Following list to always reject proposals from a certain group. We have a couple in that list I would always reject but they are always adopted, in my opinion, because they are followed for the rewards and that is a security issue for me.

No response, of cause not, when spammers would have to pay 10icp for a rejection, then no more spam and false rewards, democracy in action and you say Dfinity has too much power.

We have submitted the NNS proposal Internet Computer Network Status

I somehow missed this a month ago or so. I don’t really want less skin in the game from anyone helping make decisions.

To encourage additional users participating in the governance process we suggest that the minimum dissolve delay for voting should be set to 1 month instead of 6 months.

I’d disagree that additional participation for participation’s sake is a misguided pursuit. The magic in this whole thing is that if you make bad decisions you have to live with them. This nerfs that mechanism and gives leakage to potential black swans where people without long-term skin in the game have an outsized effect over governance.

I understand that right now there may not be enough voting power to affect things one way or the other, but trends and balances change. I’d like to see an expiration date for this if it is really for attracting users. Say 3 years? Maybe 5?

we would like to give the following update on this proposal:

The proposal was submitted by DFINITY as an idea to foster decentralization by attracting additional users to the IC.

Given the syndication and the interim voting results, the majority of the community is not in favor of this proposal. While there was consensus that it would be desirable to reduce entry barriers to the governance system, the community was not convinced that the concrete proposal of reducing the minimum dissolve delay would bring the desired effect (while still having some drawbacks).

As a result of this feedback, DFINITY voted no on this proposal and intends to work with the community on alternatives.

At the meta level, even if this proposal came from DFINITY, DFINITY sees this process working as it should: an entity proposed an idea (in this case DFINITY), and the community voted that it was not mature enough and provided constructive feedback.

I prefer the solution provided by @wpb