If the daily reward is fixed and distributed proportionally based on voting power, for neurons with the same dissolved delay supposed have the same maturity yield. But why currently I saw different maturity yield from neuron without merged(original) vs 2 neurons merged vs 4 neurons merged ? (note: all the neurons voted and follow the same neuron followees)

The followings are the screenshot of today (12 April 2022) daily maturity.
All the following neurons have the identical state (same dissolve delay, governance voted and follow the same neuron followee)

This neuron with no merged (original) yield 0.078% 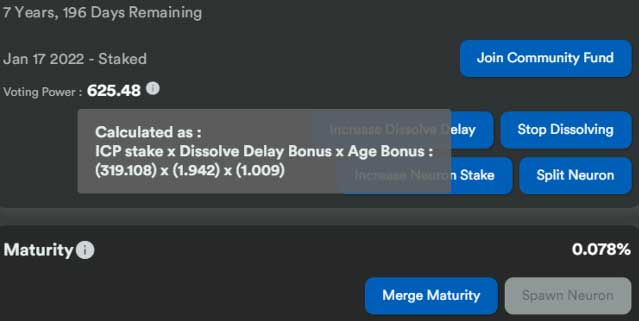 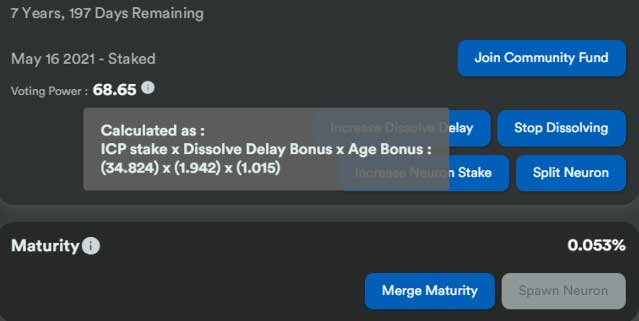 This neuron from merging four neurons yield only 0.023% 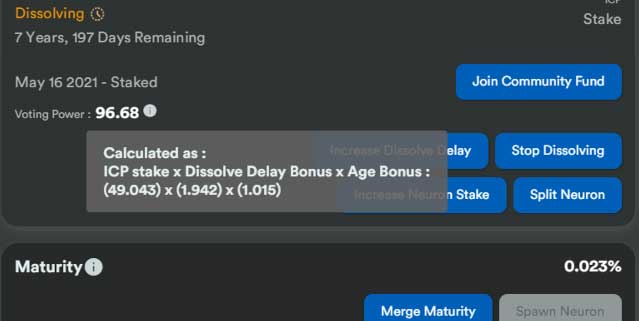 First I thought it was a glitch from the effect of merging neurons, but the maturity are consistent for the past 4 days, so I think it is a bug from merging.

People that are flagged for the community fund cannot merge staked neurons into 1.

I want ask why this is and what difference this makes in global by making the merge option for community fund members unable?

I also want to add that not everyone had the chance yet, to reverse their possition for the community fund.

That makes it uncomfortable for those who want to merge staked neurons and exit the community fund.

Is their maybe any alternatives for this in the sentence of merging staked neurons for community fund members that do want to participate?

Neurons earn rewards from the ballots that are created on their behalf whenever a proposal is created. So it will take at least the maximum proposal voting period number of days before you start seeing ballots created from the merged neuron getting rewarded. In the meantime, fractional rewards should be going to your now empty neurons, which you can recover by merging those neurons once again after this period of time. Please check the numbers again at least one week after merging, to ensure that all of the ballots are now fully representative of the new stake amounts.

We disabled merging for the community fund simply because there were still so many unknown around what the flag actually meant. It would be trivial to allow merging of two neurons who both participate in the community fund. I will propose this.

Do we now know what the community fund flag actually means?

If i have one neuron with cf flag and one without, in the new proposal, would i need to turn the cf flag for both to merge? I would like to know what that cf flag actually means.

I didn’t mean to imply that we now have full clarity. We still don’t, but stay tuned as the SNS feature develops, since this is a precursor to rolling out any community fund features.

Hi @jwiegley here some updates : my neurons from merging has a normal maturity yield now. And also I’ve merged the unclaimed maturity from the source neuron. Thanks for your explanation about how the mechanic of merging neurons work.

as I just merged two neurons 3 days ago. But as I

Yes. Give it sometimes (around 5-7 days) after merging, and re-merged your both neuron. The unclaimed maturity will show up on your destination neuron.

Hello! I am really confronted with the problem of merging two neurons that both belong to the community fund. I have such a need and I am very much looking forward to solve it. It is not completely clear to me now why it may present some difficulty. Could you please clarify this situation for me and tell me about further plans on this issue?

Your basically screwed if you joined the community fund.

You wil not be able to merge any neurons. No further explanation.

Apologies in the name of Dfinity, someone needs to say it.

Wouldn’t one be able to “unjoin” the community fund at some not-so-distant future? @lara, @jwiegley ?

I’m not sure that unjoining will ever be possible, as they represent “committed funds”.

Merging of community fund neurons is disabled currently because we don’t fully know how they will operate. For example (this is not planned, just an example): Imagine that a community fund neuron supports an SNS by providing its stake as liquidity to an AMM pool for the dissolve duration of the neuron. This would represent a stable source of funding for that pool, tied to the neuron. What would it mean, then, for the neuron to be merged into another? Would the pool lose that funding? Would the merged neuron be drawn into the pool? Etc.

There are still too many unknowns, until the feature is more fully worked out.

As already promised, if you have accidentally activated the flag, there will be a time period where you can revert this choice. Note however that currently having set the flag does not have any effect on your neuron: you can vote and get rewards as with any other neuron

This is what @lara said 27d ago…hence i am surprised that now we are saying “no unjoin”.

Additionally @lara said that having that flag on a neuron “does not have any effect” on the neuron…clearly currently a community fund cannot be merged… I am not exactly sure why/how these communication gaps exists. I think having a named product manager(who speaks authoratively for the feature) for each major functionality would help tremendously.

Note that it may be that all current community fund allocations will be reset — which is what I believe @lara was referring to — but this will be a one-time event. She and I speak often, but the landscape changes week to week. We’re both trying to give you the most up-to-date information that we have at any given point in time.

Thanks, john. I am not sure who shapes the “envelope” around community funds. As you are aware, this join-the-community-fund button was introduced in December 2021, the first tweet around this was in September 2021 by Dominic.

This uncertainty causes issues for folks who have inadvertently clicked the join-the-community-fund button.

Hi all,
right, as @jwiegley pointed out I don’t think we were contradicting each other.
We promised that everyone who joined the community fund now has the opportunity to disable this again before the feature is enabled.
After the feature is really in effect it might be that this is a one-way feature (you can join the fund but not un-join), this will have to be worked out with the final design that will surely be shared with the community.

Probably I was a bit too imprecise when I stated that the flag “does not have any effect”. Sorry if this caused confusion. As you rightly pointed out it is not possible to merge these neurons. However, you can still vote with the neuron and get rewards as with any other neuron (you just have to manage it separately).
I hope this adds some clarity. Please let us know if you have more questions!

How about we start a vote on NNS this week to reset all community fund neurons?

This is very useful for those who cannot merge their neurons. 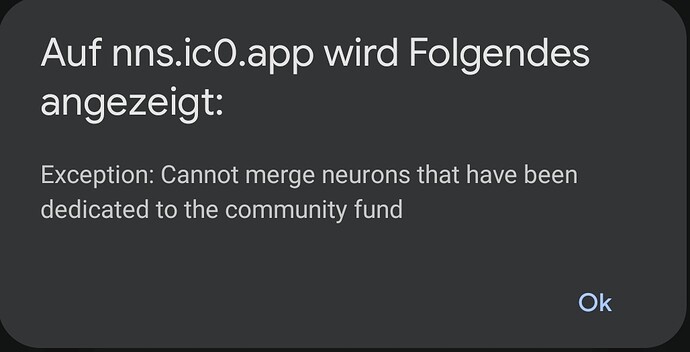 Maybe give me 1-2 days to think about the possibilities and what would be easiest?
If the main concern is that the neurons cannot be merged, another option might be to just remove this restriction from the merge_neuron functionality… But I prefer to think a bit more about the consequences of each choice with the team.