The new system will determine the reward rate and multiply the rate by the weighted vote-completion percentage and bonus rate of each voting neuron.

A result of this proposal will be the reduction in total inflation of ICP due to the fact that some voters do not vote on all proposals or follow a voter for all proposals. The following illustration shows the handing out of rewards in the old vs new system. 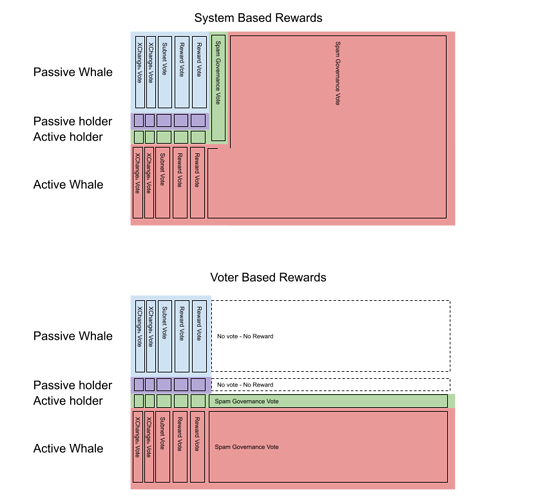 Spam is neutralized because additional proposals will not affect the ability of a neuron to gain rewards. Any neuron’s maximum reward for the day is generated by Reward Rate *(Actual Vote Weight/Possible Vote Weight) * Age Bonus. Adding extra, superfluous heavy weighted votes only increases the Possible Vote denominator and thus does not increase the number of rewards handed out in a day.

Weights can remain in the calculations to encourage participation due to the fact that each voter is only competing against themselves to achieve 100% voting for the day.

This scheme can be easily implemented in the existing code by manipulating the distribute_rewards function to iterate over all considered_proposals, finding the weight of each proposal and creating a target sum. Instead of creating a map of voters_to_used_voting_rights, the map will also need to keep track of each vote’s absolute weight. The reward function on ic/governance.rs at 73983e05ebbab239ce39492a05fb39a83ce5dce5 · dfinity/ic · GitHub will need to be adjusted to be used_voting_rights * (total absolute vote weight/target vote weight). The used_voting_rights has the age and lock bonuses built in. (Note - The reward function is mapping twice as much data, so performance may be an issue here).

4 proposals are eligible for rewards on a day. The reward rate is 15%.

The new exchange rate mechanism(New Exchange Rate Mechanism - #28 by THLO) will make spam much more attractive. We need a quick fix and this is the quickest route to implementation.

A few more notes from the discussion with the community/foundation(h/t to @bjoernek for compiling):

Personal note: I think putting the inflation into an NNS treasure is a great idea. This gives orgs like ICDevs a place to go to seek funds for specific projects that need to be built and hands control of those decisions to the NNS without as much work required by the foundation. This proposal is a step one toward doing that as it gives us an obvious chunk of value to use. It is also a win/win for the passive staker that may miss votes as the funds are still used for the benefit of the community and could, in theory, a much higher financial impact than liquidating them today. It is hard to find win/win scenarios, but we have one here.

I plan on submitting this to the NNS after seven days of discussion(unless we find significant issues).

I’m torn on this proposal. I’ll offer some thoughts, but haven’t decided yet how I would vote…

I would argue that the Governance proposal weight should revert back to 20x at the same time.

I’d be happy to propose this as well if/when this proposal passes. We could make it part of this proposal as well, but I don’t know if that is a separate proposal type. We need an IFTTT for proposals.

I would like to propose a different approach that is passive but brings the rewards to those who are more active.

Maybe then we will see that many neuron holders will reject spam as they will have the time to realize that a proposal is spam not as it is at the moment all spam is approved.

I notice that there are reject votes for the network upgrades this morning but why.

Just to repeat myself to be clear about why I think the NNS fails.

Everyday I feel I have to login to the NNS every couple of hours and if I see active proposals then I rush to vote before they disappear from my screen.

This I believe will reward those who are active and then those who follow have reduced rewards for following.

So to be clear I say no to giving rewards to projects.

Agreed with every point, especially the second. Rewards from days with no proposals should be compounded and distributed eventually.

You don’t need to do that. The governance proposals that you need to follow are already 4 days long. For the others you can just follow DFINITY for…unless you’re wanting to reject them…then yeah…you have to be quick.

Just to iterate from my side: I think this proposal would be a very practical & good solution (for the reasons outlined above) and thus I am supportive.

Functionality for this case is already implemented in the NNS. The reward pot on days without voting would be carried over to the following day.

Agreed. Aligned with the comment by @skilesare, we should consider increasing the reward weight for governance proposals. I would be in favour of that.

Yes, I also agree on that point. We should definitely consider establishing a NNS treasury, to which we could allocate for example the undistributed rewards. Given that this requires some discussion & design, this could be done in a second step.
In the meantime, we could track how much of the reward pot is not distributed.

Yes, probably the focus of periodic confirmation would shift. Instead of spam prevention it would be more about regular participation in governance.

I would like to propose a different approach that is passive but brings the rewards to those who are more active.

This is really good feedback. Thank you on all points!

Please could you confirm that?

If so, I think this has implications for named neurons.

For example, I have a named neuron that I only set up recently and only staked the reject cost of 10 ICP. I have a much older personal neuron with more staked which follows that so I only need to vote using the named neuron.

I’ve heard @Kyle_Langham say publicly that they do what I currently do, and that’s what inspired me to set things up the way I did.

However, the neuron they vote with is followed by ICPMN so if they wanted to swap things around then the ICPMN neuron would need to start following that instead.

Maybe making that change isn’t a big deal but I think people should at least be made aware of this otherwise they’d still be voting manually and not getting the appropriate rewards.

I don’t interpret anything in @skilesare proposal that differentiates voting rewards between voting manually vs vote following. The only distinction is voting or not voting. If you vote on every proposal, no matter how your vote gets executed, you still maximize voting rewards.

Also for public named neurons, it doesn’t matter if you vote with your main private neuron that is followed by your public neuron or vice versa. Another method is to use hotkeys and cast both votes at the same time. Regardless, the only reason to create a new neuron to use as a public neuron is to prevent someone from linking it publicly to your main private neuron by tracing ledger transactions and stake amounts. This is best accomplished by funding your public neuron through an exchange (or Spinner Cash would work as well).

I thought this terminology might imply voting by following vs. voting manually, which is why I asked.

Also for public named neurons, it doesn’t matter if you vote with your main private neuron that is followed by your public neuron or vice versa.

I understand that this is the way it works now, but may not be how things work if this proposal was implemented (depending on the answer to my question)

I thought this terminology might imply voting by following vs. voting manually, which is why I asked.

I think this points to a common misconception and I wonder if it’s because people view following a neuron as “passive”.

But it’s really the non-participants who don’t vote manual or follow a neuron on governance proposals that everyone is suggesting should get less rewards because their neuron is not voting at all on those proposals.

Maybe there’s a better term we all can use to define those who are not voting to replace “passive”?

I was about to ask you what terminology caused you to think it was about voting manually vs vote following. Thanks for sharing. I think @skileshare should clarify that language to avoid confusion.

@skilesare
As it stands now, I think I would reject this proposal since it is currently scoped to reduce inflation by burning voting rewards. However, I think the proposal has a lot of potential if you give it some important tweaks. Hence, I propose that you modify your proposal in a few ways:

Of course, this is your proposal and your decision if and how to modify the proposal. I’m just offering my two cents on what I think would most benefit the IC ecosystem and increase the probability of passing. I appreciate you giving consideration to these proposed modifications.

That is 100% not the case. By “passive whale” I meant whales that have not bothered to follow someone other than dfinity for governance. I’ll clarify. I consider delegating one’s vote to someone more qualified the true power behind liquid democracy.

I agree with all of this in principal but I’m not sure if we can/should do all of that at one time *in practice *.

1.An NNS team member should tell us if any of those need to be separate to enact an on chain effect.
2. Adding anything about tracking burned tokens will complicate the code changes and delay the implementation. I think I’d rather use the reduction to light a fire behind the community to find a solution. To me it would seem that the worst that could happen is a reduction in sell pressure while we figure out what to do. But I’m open to other arguments or pull request that simplify the tracking.