Continuing the discussion from Proposal to restrict rewards qualification to a threshold:

Now that we’ve handled incentivized spam, I’m re-proposing this as a quick fix for advertising spam.

I’ve adjusted the percentage down from 3% to 1%. Thanks to @Kyle_Langham 's analysis we think that 0.5% would be safe, but I haven’t gone that low…we can debate the exact number.

We can also discuss if we want the check box to default to checked to hide items that have not qualified for rewards. I think it makes it more powerful and it is hard to argue that a check mark is a huge “gate”. Anyone who wants to be a power user can be by unchecking the box.

Note : In this post, all references to “proposal” refer to all proposals, those could be restricted to governance proposals, but I don’t think that is necessary.

**Note: The NNS dapp has been re-written since the original text was created so the NNS App line source has likely changed, but the concept translates directly to the new app.

The NNS front app team will need to add a widget to allow for changing the UserConfiguredMinYesThreshold and storing the preferred value in webStorage.

How does this affects me as an NNS voter?

Why this proposal works

Additional Benefits of this proposal 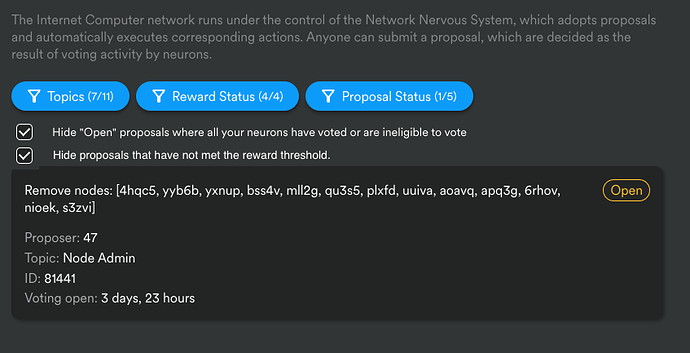 Rebuttal to (1) : Looking at one of the recent spam proposals by @ysyms, Internet Computer Network Status, we can see that only 0.2% of the total voting power is voting to accept these NNS proposals. This means that this would never be shown to most people, the vote would fail and the spammer would be charged their 10 ICP. It would not affect rewards

Keep in mind that even for some of the spam NNS proposals that garnered more than 1% of the vote, many of these votes were novelty votes that were only cast because the item was visible. If the proposer had been forced to garner social momentum they likely would not have reached the threshold

Rebuttal to (2) : If more than 1% of the overall NNS voting power support a spam attack, increasing the proposal cost would have little to no effect. The solution to this would be another proposal that further raise the minimum support threshold for governance proposals.

Rebuttal to (3) : The proposed solution does not change proposal submission costs for NNS creators. In fact, after this proposal goes live we could lower the proposal cost back to 1 ICP. If someone is submitting a proposal that they do not feel will receive the minimum support threshold by a voluntary vote, then they should advertise their proposal and timeline on the forums and social media (Twitter, DSCVR, Distrikt) to garner the necessary support before submitting a proposal to the NNS. If a proposal cannot reach 1% voluntary support, it’s unlikely that proposal will achieve a majority of voting power and pass when it goes live.

Rebuttal to (4) : It is likely important to keep the threshold as low as possible such that it is still effective against spam. This proposal does increase the risk to un-networked proposers that they may lose their proposal stake without their proposal being considered. We would argue that this risk is not insurmountable and that any good faith proposal should be vetted with the community to an extent that it can garner at least the minimum before it is submitted. In short, this proposal does create a low hurdle, but one which is likely a net gain for everyone in the system. Given that time and resources are not unlimited forcing well-thought-out and minimally supported proposals makes governance possible as activity and interest increase.

This seems like a no brainer to me. The only thing I wonder about is whether a spam proposal that is hidden due to being below the 1% threshold passes the 1% threshold right before the vote ends.

I believe we should extend the vote in that scenario. We can mimic the mechanism (can’t recall what it is exactly) of how a vote is extended when a vote flips right before the vote ends.

There are two mechanisms in that case. This proposal would extend the vote to the original amount…so if it is designated as a four-day vote, you always get at least 4 days after it passes 1%. The second mechanism is the wait for quiet. It would take over after the extension. I guess it would in theory operate before the extension as well, but that should not affect much. Even if someone gamed all the wait for quiet to occur before the exertion, it would still get extended once it passes 1%.

Is this even a problem right now? Who is actively spamming?

I think it would make more sense to wait on this and not try and fix something that isn’t even a problem right now. There may be bigger priorities.

I agree on the premise but imo it shouldn’t be based on “no” votes, NNS should have abstain and spam buttons so people can partake in governance as usual and only actual spam is filtered, other DAOs have a similar system too.

Is this even a problem right now? Who is actively spamming?

I think it would make more sense to wait on this and not try and fix something that isn’t even a problem right now. There may be bigger priorities.

I lean toward agreeing with you in general…but in this specific case, while we’ve only had one really “grief” spam, the cost to do this is editing like 6 lines of code and the devs are going to be in the code anyway. The cost in this case is exceedingly low. (DFINITY can speak up and contradict this as I don’t want to speak for the actual work).

It isn’t based on no votes…or maybe I’m misinterpreting what you mean. The trigger is “Accept” votes. Until at least 1% of the NNS thinks the proposal should be accepted, no one has to see or vote on it.

Until at least 1% of the NNS thinks the proposal should be accepted, no one has to see or vote on it.

This is the part I don’t agree with, if there were a distinction between “I don’t support this” and “this is spam ”, there’d be no reason to hide highly disliked proposals.

The NNS is the best tool we have to gather the community’s consensus, mixing the 2 options into 1 and filtering proposals will make it less useful at that. If stakers don’t like a change they should all be able to see it in the NNS and vote accordingly cause even knowing how much something is disliked can be valuable info, especially if down the line we get an abstain option too.

Simple Majority requires 3% to pass and wait for quiet extends the voting period with every lead change. So exposing a proposal at the end of the voting period because it exceeds 1% doesn’t necessarily mean it will automatically pass unless it swings from <1% to >3% AND the lead doesn’t change. There are actually a lot of voting blocks that could cause this to happen under the right conditions.

I personally don’t want to see the spam at all and would prefer to disincentivize it. Public neurons like ICPMN will likely be monitoring below the threshold, which would be a hassle if advertisement spam were prevalent.

One thing to note is that the vast majority of folks won’t be looking behind the curtain so to speak. That’s the whole point of not exposing them to potential spam.

I think it is still definitely worth still moving forward as the benefits far outweigh the costs just something to flag.

This is the part I don’t agree with, if there were a distinction between “I don’t support this” and “this is spam ”, there’d be no reason to hide highly disliked proposals

I think some examples would be good if this is true. I would consider a temperature check proposal that couldn’t get >1% accept would be “spam” in the sense that it is a waste of everyone’s time if you are that out of touch with what the NNS voters want.

I personally don’t want to see the spam at all and would prefer to disincentivize it. Public neurons like ICPMN will likely be monitoring below the threshold, which would be a hassle if advertisement spam were prevalent.

I think that this produces a bit of. “Stand-off“ situation where you won’t be seeing spam because synapse.vote

will vote no and it won’t pass the threshold and reach its audience. The likely hood of the spam being produced and the execution of the mechanism occurring is drastically reduced because the mechanism exists.

Think about how eth PoW works. People don’t submit bad blocks because the mechanism is in place to reject them. The juice isn’t worth the squeeze.

I plan to make the proposal on Friday provided we get the 10 ICP.

@skilesare Is that the right address? It seems like it was funded over a week ago. Im happy to fund but it seems like it’s already there 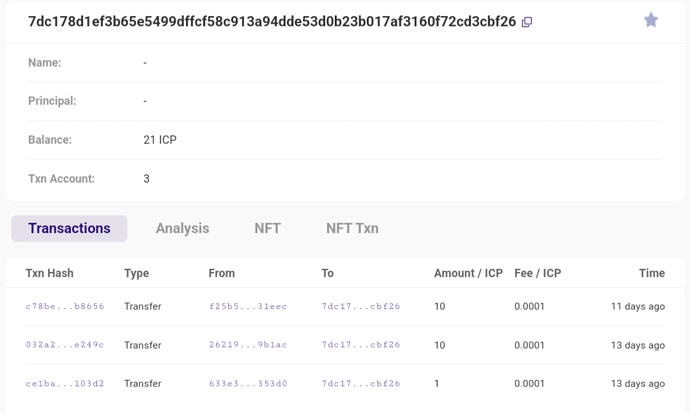 It was stated during the last proposal that the funds would be merged into the ICDevs neuron as a donation. I donated the last amount and understood that to be the case. I’m still fine with that but i’m curious how that approach differs from incentivizing accepted proposals. (purely a philosophical question; im always happy to support ICDevs)

Well…that was fast. Oh…actually someone already donated during the last one. I considered starting a new neuron and should have. That was lazy.

Ok…so I’ll take it from here and I guess it needs to get to 31. In response to @LightningLad91, it is a good question. I’d taken the crowdfunding signal from @wpb as at least a hurdle to get over before submitting it. It just happened to also be a nice fundraising mechanism for ICDevs. It is not the best environment out there for charitable fundraising. I should be more explicit on the post and will be from now on.

To be a bit more nuanced, A donation as a signal that ends up as a reward is different than a reward that is always available and mechanized. I guess there is a bit of humanizing element in it? If someone set up a smart contract to always fund a request that humanism would go out of the window. Then again, my understanding is that Wenzel didn’t submit his proposal increase because no one funded it…so as trivial a signal as it appears to be, apparently it works in practice.

Agreed! It’s a great signal and also a great way to donate to organizations such as ICDevs. Thanks for taking the time to answer my question.