Bro let the foundation do its job to promote the IC. You are creating unnecessary drama with all these
accusations.

In sum: under the control of NNS, the operation of DFINITY does not change at all; it just needs an official NNS approval in the final.

Why do I repeat it here? Because it can answer all of your questions. You just do not listen carefully.

I will repeat it again and again, until someone can find its logical flaws. I really hope that someone can change my mind.

I love NNS so much. If DFINITY can be under the control of NNS, then it will make ICP fully decentralized and may eventually rule the whole digital world.

Before you object, you can change your mind for about five minutes. That’s all I need.

I didn’t intend to get involved in this one, but since you tagged me I’ll provide my $0.02.

I think a project like the internet computer requires that it start off centralized in a lot of ways, but can, and is, evolving toward a decentralized state. This evolution will take many years or even decades, which I think is the right pace. I think there have been many communications from DFINITY that decentralization is a goal and many examples of how they have helped push the community in that direction. I want DFINITY to continue doing what they think is in the long term best interest of the IC. I have no issue with the creation of the new ICP Discord server by DFINITY. By the way, thanks for sharing the link as I hadn’t seen it yet

Bro let the foundation do its job to promote the IC. You are creating unnecessary drama with all these
accusations.

-implying the foundation does anything to promote the system.

Bro’s, its been nearly 1.5 years, and dfinity’s marketing department is an absolute dumpster fire. I’m fast believing that they actively avoid promoting and marketing this blockchain.

I’d rather all resources are allocated towards coding the stuff we need to propel ourselves, including badlands.

This topic seems reasonable as a forum discussion, but it was escalated to an NNS proposal (79944) by @ysyms today. It is not possible for a response from @zire, @diegop, or anyone at DFINITY to occur through the NNS, which in my opinion makes it an inappropriate form of communication. I believe the NNS should be used to make governance decisions for the internet computer instead of announcement spam. I had hoped we moved beyond all forms of spam, but admittedly advertisement spam is still a risk. Hence, I have started deliberation on a new proposal topic to mitigate advertisement spam until a long term solution can be implemented. Feel free to join the discussion.

I agree, I really am for people sharing their thoughts and opinions. However, personally, I feel the NNS proposal was a bit too far. I feel the discussion should have ended here. You may be running the risk of becoming a “bad actor” in the space. I would take a few days off and re-adjust after this proposal is rejected.

From my understanding, @ysyms is challenging what you guys said before

“If you do not believe the ample technical evidence, nor the words of many of us, maybe it is better you spend your time researching another blockchain project.”
from @diegop

"As @diegop said, if you don’t trust the people in DFINITY or the tech we are building, feel free to join other blockchain ecosystems. "
from @zire

The sentence is not friendly for the person who made the suggestion even the suggestion is quite reasonable. act as Dfinity officials, you should be more inclusive of everyone instead of hearing criticism and saying, you don’t like it here, you can leave. From my perspective, it’s not right manner to handle this.

Dfinity should be open-minded to criticism, @ysyms is an 8-year staker, just because of his loves ICP, he wants IC to do better in decentralization. A democratic voice should be allowed here, even if his wording is drastic.

But unfortunately, your inappropriate response that led to proposal 79944 occurred.

I think we should make lessons learn here.

I can certainly appreciate why it may appear that way. I frankly welcome critcism. I protect it in this forum and subreddit.

And maybe I’m just personally tired of replying and engaging with Ysyms’s comments because I ONLY hear criticisms (valid and invalid) and no acknowledgment of the “time spent engaging with his questions” or “when things complained about are fixed” (making me question how important the problem was in the first place… or if the problem was an opportunity to be a criticize). It’s possible this tiredness has clouded my judgment. I cannot rule that out.

To be perfectly, honest… I do not think the posts by ysyms were reasonable given the wider context of his past history of posts. The suggestion to remove “official” from a Discord server is in of itself reasonable and indeed I had independently told @zire and he had independently removed it. But ysysms posts went beyond that(as they usually do). Indeed, even though the initial complaint from ysyms was resolved (the word “official” was removed), there only followed and odd series of replies from him such as:

This is close to a borderline ad hominem attack. Imagine if I were to tell Google search engine team “don’t you guys know what a search engine is? Should this be a basic requirement for joining Google Search?” It would of course be seen not as criticism of search but as direct questioning of the team’s skills.

That being said, I still engaged and try to answer the original question ysyms posted in good faith.

In this thread, when there was ONE positive opportunity he had for replying with constructive criticism, I pointed it out to him so we can take action… and no response and of yet.

Now THAT is useful feedback. I was under the impression it was. Can you point out where it was not? That would help a bunch.

If You think I am being too harsh @MillionMiles, definitely let me know. This is how I can improve.

Glad to see your quick response!

Yes, I agree with you that @ysyms words were somewhat inappropriate. maybe because translation issue or culture different.

but anyway, I guess he want to emphasize that a sense of decentralization should be ingrained in all of Dfinity’s official external activities. the discord name of ICP(Official) is an unimaginable mistake from his understanding, so his wording starts to get emotional when you tell him to leave.

I want to express my thought:
If Dfinity only care about technology, not concerned about decentralization, then the powerful google, Microsoft, Amazon will be able to defeat IC.

That’s what my concerns.

A major contributor is the best definition of Dfinity, but definitely not ICP(Official) 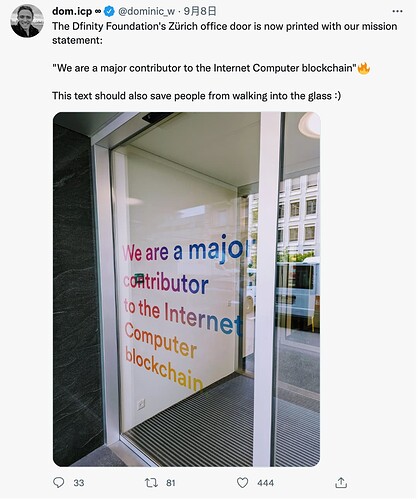 I agree, this or (@diegop) is what has helped me feel more comfortable in the space as well.

5 year and dissolving and This may not be realistic, most stakers do not have the expertise to select the right person is no nicer

More transparency and decentralized is needed, otherwise SEC would say ICP is a stock of Dfinity.
But the employees entitlement don’t need the NNS approval, it’s a issue of Dfinity internal. Every action Dfinity takes on ICP chain will be governed by NNS, that’s enough and adequate.

I went onto the discord site and had a look around.

As I see it the discord is a website that is built by theDfinity team and if they had not declared this and made it clear to everyone which in my opinion would have result in a distrust and does not warrant any approval from Neuron holders of ICP or needs to be voted on by the NNS.

The IC, if this project is built on, is available to everyone on a public network that needs no permission to be built on.

I actually use the company to connect to my coin account and upload my transactions for the financial year to determine my tax which worked very well.

The site in my opinion is a classic presentation for advertising the IC and getting anyone and everyone interested in the Public IC - P.

Even the discord name changed to “ICP”, i don’t think it’s a appropriate discord name. I think “Dfinity(Official)” is the best.

Look at the example, Japanese community to use ICP’s official Discord Japanese channel as official community. 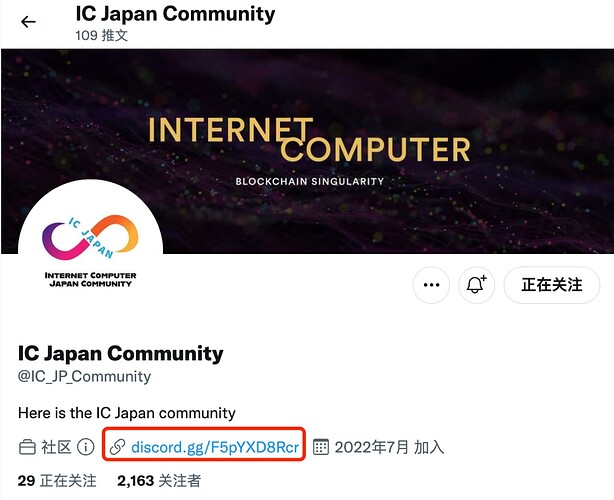 If this Discord is the official ICP community, the consequence is that maybe more and more community within the ecology will gradually be established based on the ICP official Discord, which is a bad signal of centralization.

This is my opinion, looking forward to see any response.

Million, I created the ICP Discord server. It’s a server run by the DFINITY team with strong support from many community leaders who help us moderate different language channels. We welcome all ICP members to join this Discord as this is where we often hang out as well, fielding questions from the community. If a community member wants to create another ICP XXX channel, by all means please go ahead. Nobody is saying you must join which server. The choice is always with the community. The only asset DFINITY team members can control is our own time, and we’d like to spend that time on a server where we know where to reach out to the maximum ICP community members possible in the most efficient and effective manner.

You’re firing at the wrong target.

When @ysyms started creating spam posts on NNS a few months ago, I organized a Twitter Spaces event and invited pretty much all the lead KOLs in the Chinese IC community (and @diegop joined as well briefly just to lend his support) to have an open discussion on ysyms ’ feedback and suggestions. https://twitter.com/herbertyang/status/1511262522220851200 . It was a very spirited discussion that went on for 200 minutes, yes 200 minutes. Everybody chimed in and many shared their support or at least appreciation for the spirit of ysyms’ act. @PaulLiu gave an excellent lecture on how governance works on IC. ysyms spoke for less than 10 sentences all in all, despite multiple times where I tried to give him the mic.

Before you name-call DFINITY members for not being open-minded to criticism, maybe it would be helpful to brush up some history in the community.