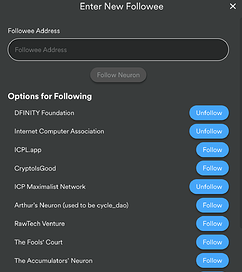 The current neuron-following interface is officially defined by Dfinity, and I believe that such an ordering is inappropriate:

To reflect the decentralization, the follow neuron page needs to be redesigned

With such an improvement, stakers will see a categorized list of named neurons when following a neuron, learn the contribution of the neuron to the NNS by sorting, and can view the detailed description of the neuron and related introductory information, which will greatly increase stakes’ knowledge of named neurons, and there is a good positive feedback for named neurons that have more valuable contributions, motivating them to to contribute more valuable proposals.

Since named neurons use a contribution value ranking mechanism, it can make it difficult for new neurons to rank high, and there is a risk that the ranking will gradually solidify over time

In addition to the name of the neuron, there should be a detailed description and official links.

There is an (optional?) description field that can be provided when registering a named neuron. The description text didn’t appear to be used by the NNS and I wasn’t sure what to put there so I left it blank.

I think description should be mandatory field.

I think the clearest description is likely the proposal text that was submitted when the neuron was voted on. It would be good to have a link to that.

Yes, link to named neuron proposal is a good idea.

In summary my suggestions are three:

I have some reservations for ‘contribution value’. We need to make sure we are incentivizing the right things. We should discuss what we want to incentivize and how we want to measure/reward that. ICDevs puts forward a number of proposals…but usually from a different crowd-funded neuron. The only really thing we can measure if they did/didn’t vote.(And I don’t think this data is kept in an accessible place on chain forever).

We add one more reason:

There is no user friendly method for determining how active the neuron you are following is. This could incentivize users to follow for the neurons closest to the Dfinity foundation vs the neuron that best aligns with their desires and beliefs.

An additional metric on the neuron follow selection screen showing neuron activity% (the average of the neuron voting power(voting power of itself and the following voting power) per proposal) for both the lifetime of the neuron and last 30 days would quickly allow users to know how active a neuron is to give confidence that their neuron is active and they are receiving maximum rewards. This could make users more comfortable following neurons that best align with their desires instead of trying to guess what one is most active.

We are currently working on a website called CrowdGov.org (sill under construction) that has some of these types of features. It is intended to be a website that can be used for research on a wide variety of IC governance topics. Would you guys like to consult on some of these types of features that could improve the information that is made available to the public? Would you be interested in helping us build these features? I have a developers grant that could be used to fund some of this development effort.

Yes, I’d like to involve this project, thanks for your invitation.

We do not know enough about this subject. That’s why we usually choose to follow all of them. And generally not to miss out on the prize. My question is, does the number of neurons you follow matter? The more the better? On the contrary, do the voting rewards decrease when following many neurons at the same time? What should we pay attention to when following? Can someone enlighten us on this? Thank you very much.

Hi @Anonim , I am working in the NNS team.
I would say one thing to be aware of that might actually speak against “the more the better” is that, if you follow multiple followee neurons on one topic, your neuron will only cast a vote if a majority of your followees cast the same vote.
This means, if you follow 10 neurons on a topic and only 4 of them vote at all, your neuron will not vote and you might loose rewards.
IIUC most of the known neurons claim to be set up in such a way that they always vote, but it is still something to be aware of.

Also, not that currently the governance canister only allows you to follow at most 15 neurons per topic (this is mostly due to the fact that we want to limit the memory that this can take).

Thank you. But we end users are confused. For a while, I was voting myself one by one, but I was still getting very low. Now, as you know, there have been some changes in the award. I’m still getting low rewards. It’s like I’ve staked but never voted. There is little or no increase outside of the standard reward. It shouldn’t be like that. People say I am doing something wrong. What is your advice on this matter? So, my follower count or who I follow should be. This is very important to me these days when the price is going down.

Do not worry about my writing. My interest is very bad.

The order within the neuron grouping should be sorted by the proposal contribution value (number of times the proposal is passed), so that the neurons that really drive the IC ecology are ranked first

For how to determine the sort of named neuron in group, i have some new thinking on below, please give me your opinion, thanks

The following factors should be considered for the sort.

A2 = Voting rate in history

When neuron registration is submitted, they all include a description. It would be nice if that description were exposed in the NNS dApp to help people make their decisions. Also, I think the order may be randomized except for DFINITY and ICA are always listed at the top. I haven’t confirmed myself, but I think I remember someone telling there is a randomness to the display order recently.

For 1: I think initiating proposals is a very important action in governance, it should be measurable as a credible factor for named neurons. Yes, the weight of the factor could be lower than i supposed.

For 3: Yes, you are right, most of named neuron only use the account with limit amount of staked ICP including ours, but i still think the staked amount could be an intuitive factor. The more ICP staked, the greater responsibility and belief, people prefer to trust them who are the firm holders.

I don’t like sort by randomized, we should give the clear message to our followers and rewards for active contributors in the design of this mechanism, but not giving the follower maybe a confusing, inexplicable, random choice.

Hope more peoples to give me your idea❤️

Actually, I would argue that the weight of (1) should be higher. Creating successful proposals is hard and an entirely different skillset from voting. A bot can easily get a 100% voting rate but I wouldn’t want bots creating proposals.

Proposals can also fail in multiple ways. They can be voted down or they may fail to execute. Ideally you could use this to capture whether the proposer is (a) attuned to the desires of the community by offering them things they want and (b) competent at actually delivering stuff that works. I feel as if there should be post-proposal feedback to measure “did this proposal do what it promised?” - this data isn’t captured by our voting system at the moment, so the door is open for populists who promise but don’t deliver.

I think the ranking should depend on the factors which can be easily recognized by people to help them make their decision. please help voting on below and give me your thought. thanks

How to evaluate a named neuron?

This can’t be a representative way of defining the sort order because people don’t use registered known neurons to make proposals or to hold a treasury.