I have noticed a pattern concerning NNS proposals that are rejected and considered as spam under the Ineligible Neurons that states The following neuron had a dissolved delay of less than 6 months at the time of the proposal was submitted.

This was the same with all the rejected spam I viewed but the Dfinity documentation states they are not permitted to submit proposals.

Proposer: The ID of the neuron that submitted the proposal. When a proposal is submitted, a “charge” is placed on its balance in case it is rejected. So the balance needs to be big enough to pay the charge on (all) rejection(s). We require a neuron to have a dissolve delay ≥ 6 months to vote, and this applies to submitting proposals too. 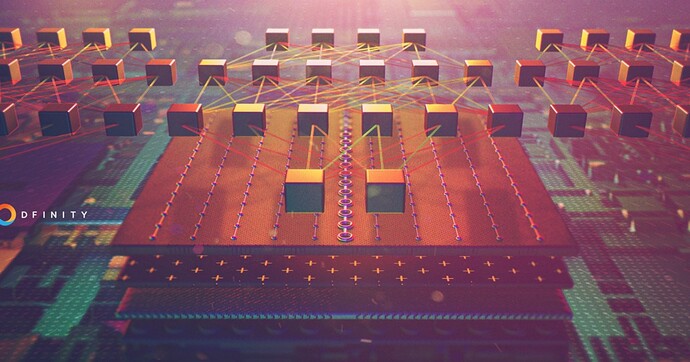 An in-depth technical breakdown of the Network Nervous System, the decentralized brain that controls the Internet Computer blockchain.

If the rule as I read it had been applied then all the spam I view would not have been able to be submitted?

But they were submitted and also voted on to be rejected? 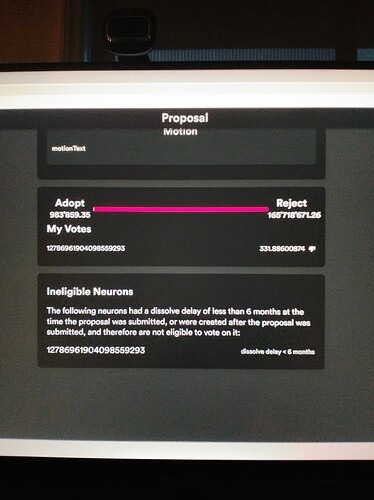 Hi @kvic thank you for raising the question. A couple points to address here:

Proposer: The ID of the neuron that submitted the proposal. When a proposal is submitted, a “charge” is placed on its balance in case it is rejected. So the balance needs to be big enough to pay the charge on (all) rejection(s). We require a neuron to have a dissolve delay ≥ 6 months to vote, and this applies to submitting proposals too.

You are correct to raise this point. Any Neuron who would like to submit a proposal must have a dissolve delay of at least six months and a balance that would be able to handle a rejection fee. In this case, the submitter of the proposals have met these requirements, which is why the NNS allowed these proposals to be viewed and voted on. Another important note from this quote is that “We require a neuron to have a dissolve delay ≥ 6 months to vote”

The following neuron had a dissolved delay of less than 6 months at the time of the proposal was submitted.

Some steps to double check this: Have you been able to successfully vote on proposals that are not spam? I suspect that you may have started dissolving your neuron or maybe never set your dissolve delay to greater than 6 months. Can you confirm your NeuronId and its current state?

Thank you for your response. I have a neuron that is staked greater than 6 months, have not started dissolving, following and have voted on many proposals, 2 this morning, 1 I think was spam as was rejected the other was accepted and I have received rewards.

The Neuron number is the same.

Have I exposed my self with displaying the Neuron Number

I have a neuron that is staked greater than 6 months, have not started dissolving, following and have voted on many proposals, 2 this morning, 1 I think was spam as was rejected the other was accepted and I have received rewards.

Interesting. I also checked your neuron on the Internet Computer Network Status and saw that it is a recently created Neuron (~15 days ago) and as you said it has not started dissolving. Can you provide a ProposalId that you have seen the error for? It could be that it was created before you staked your neuron.

Another question: when did you set your dissolve delay? Did you set it to greater than 6 months at creation time? All of this information will help us pinpoint what went wrong.

Have I exposed my self with displaying the Neuron Number

Not necessarily. It depends on how anonymous you would like your neuron to be. Neuron information is public (as you saw https://dashboard.internetcomputer.org/ can display info about any neuron), so now there is just a forum post with the neuron id in it. This however, does not guarantee a link between your forum profile and the neuron as there is no connection between this forum and the information in a neuron. What’s more, there are plenty of public neurons, and many people are now posting their neuron ids on their Twitter. However, if you would like it to be private you can always edit your original post and remove the reference to it, and I can edit this reply to remove the dashboard link to it

I haven’t started the Start Dissolving Button and was just going to leave it till sometime in the future which my neuron is staked for 200 days so it is over the 6 month period and as I understand it and as my account also shows I am receiving rewards for following and voting.

As for my other concern I was in Voting and selected the Proposal Status button where I check Rejected and then filtered.

GM-test
I am still very bullish on ICP, but I am concerned about the decentralization of ICP. web3 deprives many governments of minting power and jurisdiction. I do not know how DFINITY will make a trade-off between compliance and centralization in the future. I think ICP should break away from DFINITY as soon as possible. The ICP should connect directly with developers, not through a centralized organization. I heard that there are not enough people to develop the front end of NNS? Is there a possibility to motivate more developers to contribute to IC by issuing ICP by nns?

And I was interested in this message within the neuron details.

So this seems as pointed out to me that my neuron states I was Ineligible to vote with a dissolve delay < 6 months.

Why did I stake for 200 days and not Start Dissolving. I didn’t want to stake for eight years but this way I still can if I want as I understand it with reduced rewards.

But I am not sure why I am ineligible to vote on this proposal above and many like it.

Apologies for the delayed response @kvic. Given this new information, I’m going to escalate to the NNS frontend team, but one last question for info that I can’t collect from the dashboard: when did you set your dissolve delay to 6 months? I see the first proposal you voted on was 59578 which was created after the example proposal you provided in your last reply. It seems, however, that you’ve been able to vote successfully since then so I don’t think there is something wrong with your underlying neuron.

Here is some of the data (all publicly available through dashboard.internetcomputer.org) I’ve collected to try to figure out what the issue is:

When I created the neuron I knew that I would NOT set Dissolving to be able to receive rewards and set staking to the 200 days as I hadn’t heard back I tried to increase that period to see if anything changed.

I don’t see the date but this morning I found:

Just log in to the NNS and there is a proposal phase 3 donation which I can’t vote on but has not concluded and I can see the reject number go up? 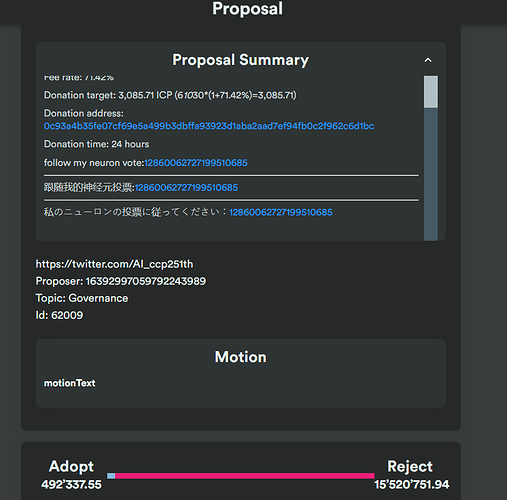 So I take it from your namesake you feel you need to intervene on behalf of ysyms for his white hat stance on showing the community that the nns can be spammed or are you being direct in that you feel it is your right to spam because the price of icp has fallen another 20%?

I don’t care about the price and will buy some more soon and look at this project as having substance and value other than the price of a icp.

People who think and keep saying that ICP price is not important are doing a big mistake. How do you think all Dfinity employees (250), all high salaries, are getting paid? How do you think all nodes providers are getting paid? It is imperative that the price need to go up for the health of the entire ecosystem. I just don’t know how low it needs to go before trouble start.

I created this neuron in Nov last year and set 8 year locked at the first and never change it since. I have other neuron with the same problem too.

Is this a bug in the system or just a bug on the frontend? I also checked https://dashboard.internetcomputer.org/ and found I indeed didn’t vote on it. Please help @DanielThurau !