What are good patterns to manage state across several canisters? Regarding non-atomicity

I underestimated this so far. But there does not seem to be so many threads about the topic so far.

How are you all dealing with that?

What kind of state? You want all canisters to share the same state?

Sorry, I should’ve given more context but I’m not sure if my thinking around this topic is correct at all.

In my concrete case, I have 3 canisters: market, db, and invoice. Most of the logic happens on the market. The db canister is separate as we wanted to use Sudograph as a “db” and write Motoko for everything else. That architecture might not have been the best solution. If I could write rust I would have just added logic on the db/sudograph canister directly.

The main thing the app allows users to do is to ask questions that have financial rewards “attached” to them. To ask a question a user transfers some ICP to the accountId of an invoice. Once paid the question can be opened and others can answer it during some time. After that time there is a process that decides which answer/user wins the reward.

The most concerning issue I had during testing was regarding payouts. When a winner is selected heartbeat is used to close the question on the db and to transfer the reward to the winner. If the whole app would run on one canister I could just go through all the questions that are eligible to get closed, do the transfers, and if they succeed I could close them.

Because that is not the case I think I face these issues:

Problem 1: Transfers
There could be a previously triggered transfer that is still outstanding. Heartbeat could possibly run the function again (and trigger another one) thinking the payment was not done yet. I, therefore, need to be sure that the closing/payout function related to a specific question directly returns unless there are no outstanding calls on the ledger.

I guess the two problems are the same issue but it’s not completely intuitive to me. The solution I ended up implementing seems to work but I guess it could be simplified. And I find it generally confusing to think about it.

To answer your question it’s not that several canisters should have the same state but each canister manages a part of the state. If it was all happening on one canister my mental model would be that my functions trigger a specific state transition for a given question (ICP balances change, variables of specific invoice change, variables on the question change, → all at once).

In the non-atomic environment, I started to think of it as a sequential multi-step process where each canister does a different step of the entire process. An example of a process would be: verify the invoice → open the question.
I think in my case, it’s hard to “roll back” what happens on the invoice canister (haven’t thought a lot about this though).

To complete the process while preventing some steps from being done twice I think I have two options:

Does that make any sense?

In both cases, I have to keep track of what has already occurred if the process possibly ran before.

I’m not sure if what I say makes any sense which is why I did not provide too much context before. Am I on the right track? Do you have a mental model that makes it easier to think about this? How do you test that stuff (seems a huge pain to me)? How do you even log state across canisters and understand which change happened due to what calls?

I don’t have a formal CS background, so it might already be helpful to know what topics could make me understand this better.

I’m also trying to understand this to decide if the architecture was bad from the beginning. Having a separate db canister might have been a bad decision. I could possibly also make invoice canister a module. What do you think?

Thanks a lot for the help.

Problem 1: Transfers
There could be a previously triggered transfer that is still outstanding. Heartbeat could possibly run the function again (and trigger another one) thinking the payment was not done yet. I, therefore, need to be sure that the closing/payout function related to a specific question directly returns unless there are no outstanding calls on the ledger.

You have to think in a pessimistic way. In this code, I’m guarded against double spends because I use the ledger as my state and it won’t allow you to double spend…but if you aren’t using a ledger then you need some kind of “lock” variable or you need to remove the state that allows you make the call.

If you call fails then you need to manually revert your state back to how it was before. Because Motoko keeps the state in memory this is fairly straightforward with a try/catch.

One caveat to keep in mind is that when you get back from your await call you may want to requery your data from your internal collections to make sure they haven’t slipped out from under you while you were not looking.

So you have 3 options:

Thank you very much I appreciate the answer. I’ll need some time to go through your example and the blog.

And I should generally read more of your code :).

Does Motoko have something like enums? I find it really easy to create state-machines with enum in rust, and I find state machines the safest way to reason about stuff, as long as the entire logic is canister-side. It might not be the most efficient, but it’s the easiest to code for, without shooting yourself in the foot, IMO.

For example, for a prototype game that I wrote, I have the following code:

I then use a public, unauthenticated function that “moves” the expedition step along. It is safe to make it public and unauthenticated, because the main logic happens on the canister. At each step there is only one step that can go right, and possible one step that can go wrong. In general, on the happy path you go downwards into the enum, with the only exception being if Starting fails, then we go back to Ready, and try again when someone calls the function again.

As I said, this would not be the most efficient way to code it, but I find that the benefits outweigh the cost (which, tbh, is pretty low on IC so you’re probably fine in most scenarios).

In your scenario, I’d probably start with something like this:

With this approach, you maintain a single point that has a consistent state of a question. That canister can call into other canisters async, verify whatever it needs to verify, and only “move along” the happy path as it receives proper responses. This will guard you against double spending & such, since payment can only be done in a single state, and the first call that comes in that state gets to move the state along to PayingOut, blocking any subsequent calls.

Let me know if I wasn’t too clear, I can get into details if you want.

Thanks @GLdev! This is a great pattern.

This is great. Interesting would’ve some kind of history component for.each state to share for auditing.

Thank you very much for the answer, that is very interesting (took some time to think about it).

To solve the issues around atomicity I store the result of the payout on the market and only attempt to close it in the db if the payout was successfully done. And if not I obviously try to do the payout first.
I furthermore, prevent the function from executing the logic again when a previous call is still ongoing. So in a way, I try to do both tasks in one go.

It’s a similar logic but it seems much nicer to think of the payout and the closing as separate steps the way you did. The “PayingOut” makes a lot of sense to me because it implies that we would not allow the logic to execute again when the question is in that stage. And if I understand correctly we would go back to the previous step if the payout would fail.

This is interesting because if it was all atomic I would think of the payout and the closing as one state transition. With 3 canisters I would need to think of this as 2 tasks basically, one for the invoice/ledger canister(s) and another task for the db. The tasks occur one after the other and can therefore be separate steps. I find it unintuitive that we do several steps for something that would normally be 1 state transition. I’m trying to understand what could go wrong doing so… But yeah maybe the “cost” is just that we can’t solely use the db but need to keep track of these steps at least temporarily on the market.

This makes me further question if it makes any sense to have a separate db canister. Would it only make sense to store the contents of a question in case that is a lot of data (if I’d allow for pictures or so to be used)?

And how exactly do you test all of that? It’s not yet trivial to me yet how to write well-structured tests even in the atomic case. But with several canisters involved, I’m rather lost.

Motoko has variants, which can be used in a similar way.

I gave a talk on them at Motoko Bootcamp:

I believe @Hazel is using sagas in Quark.

I think this is probably a good overview but @Hazel might have a better resource. 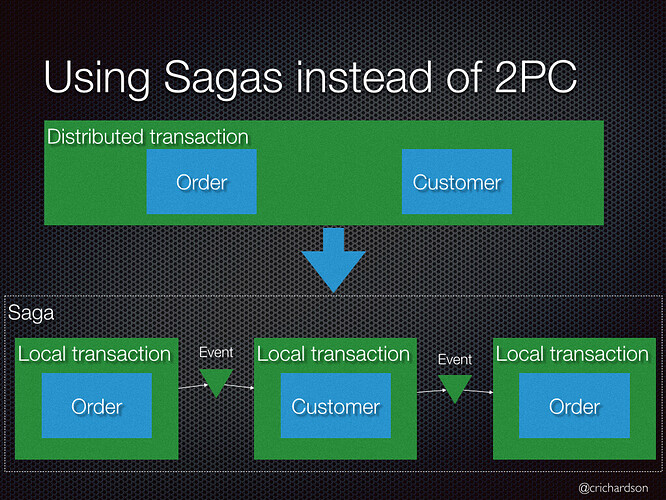 Huh, I always compared developing for IC with writing server-less / lambda functions from web2, but microservices is also a very good analogy. Very interesting pattern that probably has a lot of resources and tried and true approaches at solving atomicity & inter-communication.