BUG: candid_method macro messes up intellisense and stops it from working

Applying the #[candid::candid_method] macro for autogeneration of Candid in a Rust project breaks intellisense on that function. Here’s a minimal reproduction: 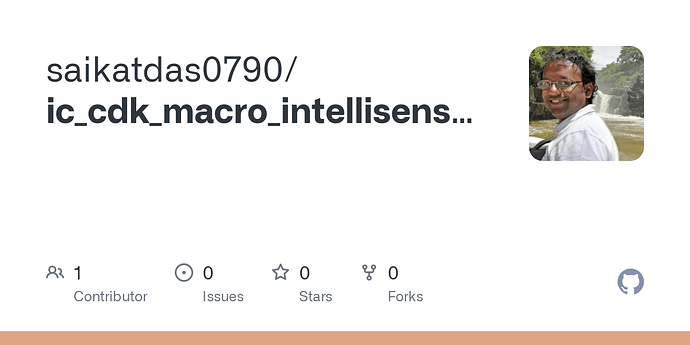 Contribute to saikatdas0790/ic_cdk_macro_intellisense_test development by creating an account on GitHub.

Here are some screenshots: 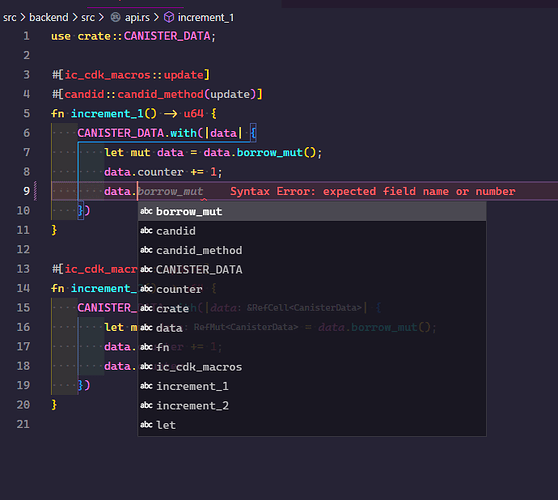 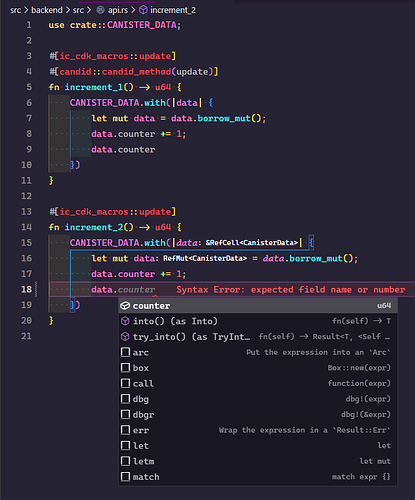 I’ve posted the bug to the Github repo but adding here for visibility. In case you’d like me to remove either, do let me know

I’m not using VSCode, so hard for me to triage the problem. But it seems like a rust-analyzer problem, since rustc can compile the code just fine?

Thank you for confirming. I will open an issue with the rust-analyzer repo.

I opened an issue with the rust-analyzer team here and they acknowledged the issue and had thoughts on both how the extension could possibly handle this scenario better but also on how a part of the candid method macro should ideally be written differently.

They also point to the offending code here

Would appreciate your thoughts on the Github issue to get us to a resolution.

Thanks for the update. It all makes sense. I don’t see an immediate solution on either end. As a workaround, can you comment out candid_method while using auto-completion and only enable them for deployment?

From what I understand, this issue will persist for now until the macro code is rewritten to not use this:

Would you consider adding an issue in your issue tracker for the candid macros so that this behaviour is rectified when you’re refactoring/updating candid macro code in the future?

The offending code is here: candid/func.rs at master · dfinity/candid · GitHub, which is blocked by the Rust issue I linked in the comment. I will watch that issue when they have a solution.