Welcome to check out ! 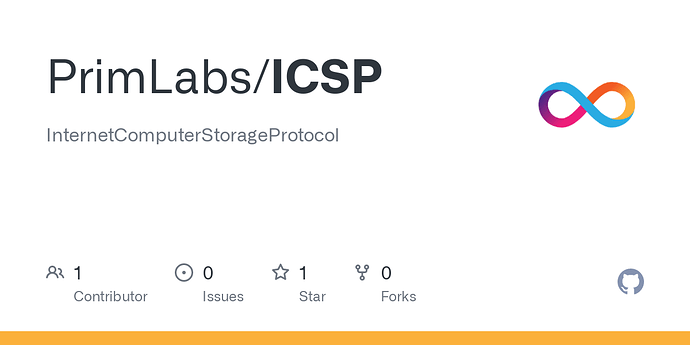 InternetComputerStorageProtocol. Contribute to PrimLabs/ICSP development by creating an account on GitHub.

Awesome and pure key/value store! I’d love to see you replace blob with CandyLibrary so you can store all kinds of data!

No, please don’t replace anything with CandyLibrary. The native types exist for a reason.

There’s huge overhead with variant types, as we’ve discovered today in our project. I couldn’t think of anything worse than having a “variant type of all types”

What did you figure out? I thought it was like two bytes as long as you kept it under 256 entries?

And how else are you doing hierarchical data?(If you are)

I can’t tell you exactly because it’s a black box. We replaced variants with text fields and reduced our wasm function count by 600, from 5600 down to 5000.

It wouldn’t matter if there wasn’t a 6000 function cap on the wasm binary.

Good to know. Thanks. We’re doing a bunch of json and whatnot and nested documents that seem to require variants of some sort.

It’s with great pleasure I present the fruits of weeks of labor: Scaled Storage

Before starting this bounty, I knew I wanted to build a general solution that could be easily added into any rust project.

While working on the bounty, the following goals drove most decisions I made:

Scaled Storage is a generic distributed hash table tailored for the internet computer. It can scale to possibly infinite amount of canisters, with a worst case scenario of one inter-canister calls and usually a best case of zero (I’ll got into this later). I’ve currently tested it to 10 canisters. The client side never needs prior knowledge of all canisters holding data, but instead just the canister id of any one of the canisters.

How It Works
Scaled Storage uses a consistent hashing algorithm to map keys to their appropriate canisters.

When a key is accessed through the exposed functions, the result is either the value or the canister where it is located, In the latter case the request is simply forwarded to that canister. Here’s a code excerpt:

Upgrades & Migrations
When nodes are added or deleted, the changes are broadcast to all other nodes.

These nodes then update their node list and hash function. The affected values that need to be migrated are converted to a generic byte array and sent to the relevant node.

The consistent hashing algorithm in question is Anchor Hash which has “high key lookup rates,and a low memory footprint” according to the authors of its paper.

This particular algorithm guarantees that given N number of nodes and K number of keys, the hash function distributes K/N number of keys to each node, achieving uniformity. It also reduces the amount of inter-canister calls necessary by: 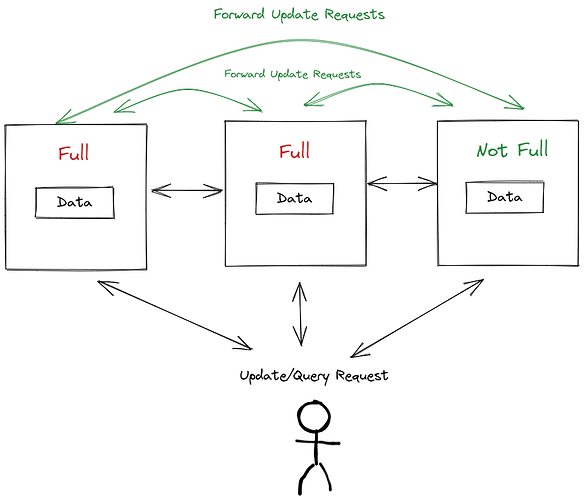 Scaled Storage can be described as a linked-list of nodes with each node having the following:

I chose this linked list structure over an “index node” → “secondary node” structure for the following reasons:

Although Anchor hash prevents unnecessary data migrations, it distributes data equally amongst nodes, typically this is a desirable effect, but for Scaled Storage this means “filled” nodes still have data inserted in them (although the possibility of that reduces as the number of nodes increases).
A better hash function would have the following properties:

This would limit the number of canisters to be migrated to only one; either the prior node (downgrades), or the next node (upgrades).

Summary
There’s still significant work to be done, but the foundation for a generic easy to use scaling solution has been created. Thanks for reading.

First off, I want to say that I absolutely love this scaling idea and what you’ve done with data partitioning, especially in the context of canister reliability. Very cool work, and I can tell you put a lot of hard work into designing and building this!

If one can distribute their data enough that one canister has the same management capacity as all canisters, then it becomes much harder to DDOS an entire application (you may just take one or more canisters offline).

Although I love the creativity of this idea, I see several potential issues with the scalability of the design in terms of the involvement of inter-canister update and/or query calls required for all the nodes to remain in sync. The fact that multiple canisters would constantly be rebalancing with each other (using inter-canister update calls) quite often means that when under significant load the entire application would most likely slow down and get “behind” on rebalancing.

In a large enough application with enough of these requests coming in, I could see this eventually leading to application failure.

We were at about 5800 wasm functions (not using any optimisers at that point). We had about 17 entities that used variants, ie…

I changed the go generator to skip variants and just reference them by ID (like a normal database relation), then recompiled and we were at 5200.

Going through the wasm-objdump logs and grepping for #common returned way more lines than I would have expected. It was at about 40 per variant, which makes sense if we dropped about 600 funcs.

Hi, thanks a lot for the praise.
About re-balancing, only the last canister has sole responsibility concerning upgrades or downgrades. So it’s impossible for an upgrade and downgrade to occur simultaneously. Also migrations (or re-balancing if I understood you correctly) only occur two ways: To the last node and from the last node, no other canister is affected in the re-balancing operation.

A good practice would be to return the canister id of both query and update requests (Check out the second demo on how I did it). This canister id can be cached in localstorage and called later:

Update for the description of the second example (ic_snippets).
The goal was to be able to serve paginated data which is somewhat difficult given we’re storing data on what is basically a key value store. Here’s how snippets are stored: 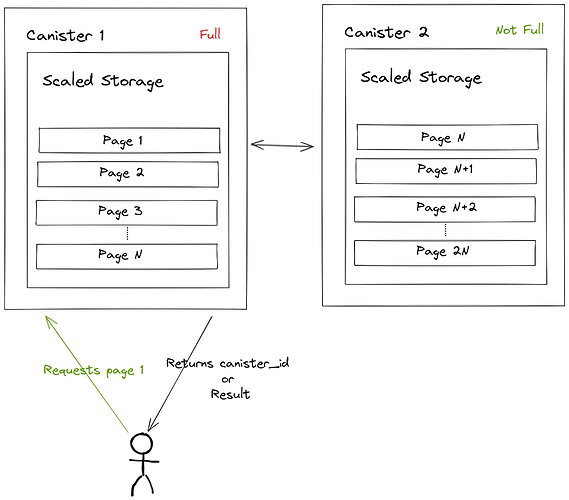 Each page has a max number of snippets before a new page is created. So now the client can request for a page and request for prior or subsequent pages on demand

@simdi.jinkins Thanks for correcting my misunderstanding of how and when re-balancing happens (when node “full” threshold is hit) and taking the time to answer my questions.

I hope you don’t mind me asking few follow-ups

I’m still not quite clear on the details of how when a new canister is spun up (we increase # of nodes from N → N + 1 → N + 2), how the client becomes aware not just of how many canister nodes exist and the canister node partition to send the request to, but the specific canisterId corresponding to that node.

When the management canister creates a new canister parition node, it generates a completely random canisterId along with that node, one where the application developer cannot fix, control, or predict what the canisterId will be (I wish we could do this!).

How would a client then be able to guess this random canisterId when making requests if it has no control over the canisterId generation? There must be some “fixed” initial canisterId representing Canister A in the client application that the client can first use to make contact with the data storage solution, correct?

Since operations can be taken from any canister, operation results could contain the id of the canister and stored/cached on the front-end. Subsequent operations could then be directly requested using the stored canister id.

I see this as your solution to the issue I mentioned above. The client is told a single canister that they will interact with, and they use this initial canister to then get all information about the current array of canister ids and the current hash ring that they can then use AnchorHash algorithm with on the client side. If a re-balancing happens during the middle of a client session, the client needs to re-fetch the new array canister ids and the new hash ring.

However, this approach means that all clients are still originally directed to the same initial canister for fetching this cluster data, and that each application client will have a hardcoded canisterId that they will use, since they can’t predict the canisterIds of dynamically created canister nodes.

Is this a correct assumption?

This needs benchmarks, i can’t really say as it depends on the size of the values stored: a simple string contains far less bytes than a struct or a hashmap. Also there can be optimisation made to make sure the data migrated is chunked at little as possible; reducing the time it takes to complete a migration.

About a month ago, I had these exact same questions about data transfer speeds (inter-canister, ingress, egress, etc.), and the question got pretty much ghosted and went unanswered

Whether no one has been brave enough to test this out or just hasn’t made their findings public, there are multiple anecdotal comments from developers who have mentioned that downloading 1-2 MB of data from the IC can take a few seconds in this thread.

By the way, consistent hashing is pretty cool - I didn’t know much about it before reading your solution → this article has a pretty neat breakdown with visualizations on how one might naively implement consistent hashing and how it works in general.

Looking into consistent hashing, it looks like for each new canister node being spun up the rebalancing cost is O(K/N), where K = the number of keys and N = the number of nodes.

This would mean that as you scale up, for each new node added the performance cost of data transfer redistribution remains constant.

I see this as your solution to the issue I mentioned above. The client is told a single canister that they will interact with, and they use this initial canister to then get all information about the current array of canister ids and the current hash ring that they can then use AnchorHash algorithm with on the client side.

Not at all, the client doesn’t have to know anything about the number of canisters or anything apart from the initial canister id. The hash ring is only implemented on the canisters.

If a re-balancing happens during the middle of a client session, the client needs to re-fetch the new array canister ids and the new hash ring.

Hmm there are two cases for a re-balancing occurring:

Thanks for bringing this up.

However, this approach means that all clients are still originally directed to the same initial canister for fetching this cluster data, and that each application client will have a hardcoded canisterId that they will use, since they can’t predict the canister Ids of dynamically created canister nodes.

I think you may be forgetting that, all the nodes get their hash-ring updated after any re-balancing. So any request from the client to any node still gets sent to the appropriate canister id.

Did I get that correct ?

I think the question is that if it 50/50 on two and all keys are increasing ints(say a time stamp), do they all end up going to the same canister?

Most likely not, key distribution is unpredictable. If you want to group keys together in the same canister you would need to use a higher level data structure that stores multiple keys instead of using the keys themselves.

Does the library support certification? It would be interesting to see how one would go about splitting and distributing merkle trees.