ICPMN voted exactly 4 days (96 hours) after proposal 70015 was first submitted. The minimum voting period on all proposals is 4 days. We provided all the time that should be needed.

That said, I fully agree that implementation of proposal 38985 would ensure that everyone has a chance to change their vote if needed after their followee casts a vote. It’s not practical for public neurons to wait until a specific time to vote.

When I think about any proposal I like to vote what is best for all of us because I wanted to get away from the Top Tech Centralized systems where One is in control and I felt that Decentralized would be much better but all I have found is many Centralized opinionated people.

Does it matter how many tokens any of us have?
It is my right to do all those marked under Decentralized.

Most of what I see here is about changing the NNS to reap more rewards for yourselves and justifying it because they follow the rules or have too many tokens.

If you make the changes you want here are you not alienating and the cause of neuron owners wanting to leave with all of these trite messages that are harped on with over and over.

Have you nothing to contribute that would give us something to vote on that would further the NNS.

If you didn’t have these Trite complaints then wouldn’t you be nothing more than Bystanders which is less than a Follower.

When is this implemented? I still see spam

Update: there was a new version proposed and the PR that makes NNS-dapp UI allow vote regardless if proposal is declined or accepted, as long as the duration is valid, is live

The filter “Hide “Open” proposals where …” inherits also this improvements - e.g. if you select proposal status “Accepted” and “Rejected” and use previous filter, it displays the proposals to which you can still vote. 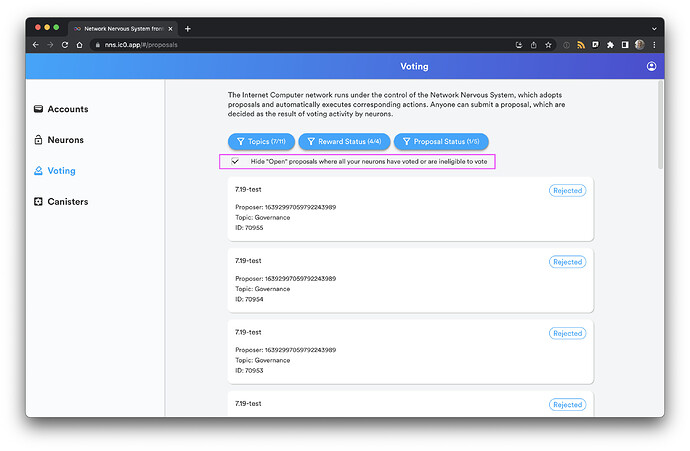 Late to the discussion/proposal but had a thought of couldn’t we have done the opposite and increased the weight by more. It would help reduce spam as the incentive would drop off at a faster rate, so potentially you might be able to get it to so anything after 1 would not have a significant enough reward. And this could have a chance to not reduce the rewards of those voting and only reduce the spam.

But guessing there’s some ripple effect with this approach?

This proposal (70015) reducing the governance vote weights passed a two days ago, but I’m still seeing the reward weight for new NNS proposals at 20.

From this GitHub commit, it looks like the code change for the “tactical fix” was completed and merged into the main branch ~5 hours ago (as of this post).

When can voters expect this committed change to be pushed out to the NNS?

I think a new replica binary is deployed once every few weeks (containing all code changes since the last deploy). I could be wrong though.

@justmythoughts: The code change is planned to be released early next week.

@jzxchiang: And yes this is correct. We typically try to bundle changes over a few days and then release. For this one I am not sure yet if it will be bundled with anything else.

The incentive of garbage proposals comes from income. The four garbage proposals have maximized the benefits, and there will be no 40-100 items you mentioned. Please make full research. Unfortunately, the proposal was passed.

An imperfect system without junk proposals is the biggest tragedy. There is not only one way to solve the garbage proposal. We should allow time to solve the garbage proposal, rather than being a nanny and always worrying about the damage of neurons that do not participate in governance. Self responsibility is the spirit and foundation of blockchain.

It is suggested to increase the weight of participation in governance and attract more people to pledge and governance, which will eventually solve the garbage proposal, but it will take time.
Your proposal was passed. It’s a pity that the community made a wrong choice.

If 4 spams per day, it also contributes to increase the reward and increase the inflation of $ICP to the market, affecting the price of $ICP. need to sacrifice personal interests for long-term orientation. Don’t think there is spam you will have more % reward. it will cause the supply of $ICP to increase faster and the price will go down. It will also affect your assets.
so I’ve always been in favor of an anti-inflation mechanism. so my vote for this proposal is Yes!!!
for me holding 10$ICP but its worth 1000$/ICP would be better than holding 1000ICP but its value is only 1$/ICP.

Proposal will not affect inflation rate

Hi all, FYI the approved change on reverting weights of governance proposals back to 1 is planned to be released tomorrow.

As discussed & suggested in this thread, we can monitor the spam situation post this release. If the spam is not sufficiently mitigated, we can consider further measures like increasing the proposal submission cost.

Thanks for letting us know @bjoernek.

@ysyms does this governance proposal weight change that will be implemented tomorrow affect your plans for submitting spam for the rest of the month? I think the original goal of this proposal was to stop the spam. Do you plan to stop after tomorrow, or will you be continuing until the crowdfunds run out? I’m asking because the next step that was submitted with the proposal is to increase the proposal reject fee if the spam continues. It seems reasonable you could just stop and keep the remainder of the crowdfund since they no longer have your intended effect. That would prevent the proposal reject fee from increasing as well.

That would prevent the proposal reject fee from increasing as well.

To be fair this would require a vote to increase the reject fee again. And it looks like in the previous 1->10ICP proposal the No was winning significantly until the Dfinity vote at the very end. To further increase the cost might have even more pushback as it will be increasing the barrier to submit a proposal based off of expendable wealth which feels like it would go against the push for decentralization.

If the spam is not sufficiently mitigated, we can consider further measures like increasing the proposal submission cost.

Would Dfinity consider implementing proposal 55651 ASAP to fix the issue while simultaneously fixing other non sense issue like dead neurons owners still voting, inactive or lost account still voting and may change the course of the blockchain with their votes?

Does Dfinity made an analysis about the productivity as if it is more productive to deploy temporary measures to be reversed later on, thus loosing more time, than implementing the right one that was passed over 3 months ago?

I, and some others including @wpb , do not agree with the subjective asssesment provided by Dfinity about the proposale 55651. To me personally, it looks more like an excuse not to implement the proposal. I really hope I am wrong on this one though.

Transparency is really appreciated, when we have.

Would Dfinity consider implementing proposal 55651 ASAP to fix the issue while simultaneously fixing other non sense issue like dead neurons owners still voting, inactive or lost account still voting and may change the course of the blockchain with their votes?

Hi @coteclaude, as analysed in this thread, we would need to do some further design work on 55651 (Periodic confirmation of followees) before releasing it. In its current form it would not allow the roll-out of urgent hotfixes which we consider to be very important to keep the IC secure. This point was not considered during the deliberation of 55651 (and also DFINITY missed to point this out and consider this before the vote).

In its current form it would not allow the roll-out of urgent hotfixes which we consider to be very important to keep the IC secure.

Can you elaborate on this, I don’t quite understand your point?

The governance participation rate is > 50% VP, which shows that voters are quite capable of reconfirming/updating their neuron follow choices every so often.

Can you elaborate on this, I don’t quite understand your point?

The governance participation rate is > 50% VP, which shows that voters are quite capable of reconfirming/updating their neuron follow choices every so often.

Sure, I am happy to provide further context!

The concern is that it currently takes several days to reject or approve governance approvals (and sometimes even the full 4 days plus wait for quiet given that we are just on the edge of having governance voting participation of more than 50%).

Periodic confirmation of followees would lead to similar voting participation on non-governance topics. If a really urgent update is needed (e.g. update of a subnet), waiting several days would pose a big security risk. Hence we do not recommend to implement 55651 without further enhancements.