Thanks for your fair comments on @ysyms, really appreciated

. I just want peoples to know what kind of person @ysyms is.

To me, the fee should be increased until it is just high enough make them infrequent.

Regarding the proposal reject fee. I don’t think the spam proposals are now so frequent that we have to take a temporary motion to stop. 79944 is the 1th spam proposal for advertisement, it’s not 10th. are we overreacting?

Summary
I would prefer a complete solution that not only prevents spam proposals, but also has a positive impact on community participation in NNS governance than a temporary solution.

Happy to receive all your response.

As long as the current exchange rate mechanism (which is currently responsible for the vast majority of NNS proposals) is in place, the reject fee should not be increased any further.

I agree with those who are in favor of implementing a more permanent solution to the spam problem instead. Personally, I think the first step should be the “voter-based” rewards mechanism discussed here.

If the reject fee is to be increased anyway to prevent advertisement spam, this should be done after the new exchange rate mechanism is deployed.

I propose to remove ICPMN Neuron from front-end so that they don’t continue centralising NNS with useless proposals like this one. No offense.

This proposal has nothing to do with ICPMN, but you know that already. This proposal topic is my suggestion, Wenzel Bartlett (wpb), acting as an individual contributor to governance related to the IC.

Feel free to submit any proposal you want. If it’s a good one then it will pass. If it passes, you will keep the fee…meaning that good proposals don’t cost anything.

The ICPMN is very transparent about voting
members and voting policy. You have been provided this link many times in the past, but here it is again for your easy reference. 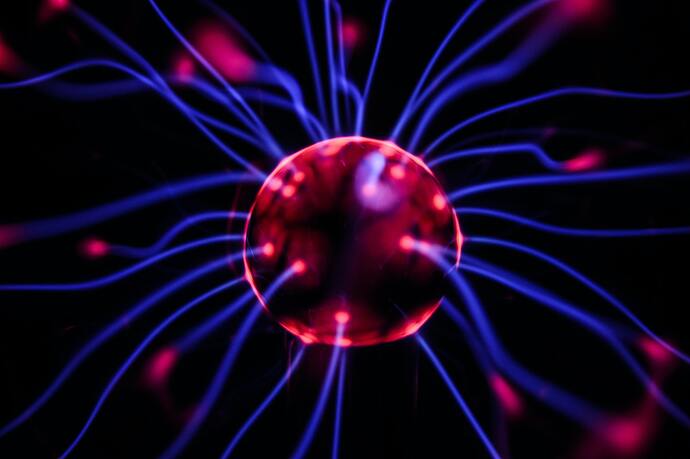 Provide the Internet Computer (IC) community a named Followee neuron in the NNS dApp that is representative of the ICP Maximalist Network (ICPMN) community.

100 ICP ? What about if ICP reach 1000$ ?
Is it really so much disturbing ? Maybe we should continue to ignore the spam. I prefer a bad person who submit a proposal than 1 good one censored by the fees. The situation seems acceptable now. We shouldn’t give them more energy and wait to see what happen in future. Let them lost 10 ICP. Perfection will not exist in democraty. The goal is not to reach perfection but an acceptable level of imperfection.

Wenzel Bartlett (wpb), acting as an individual contributor to governance related to the IC 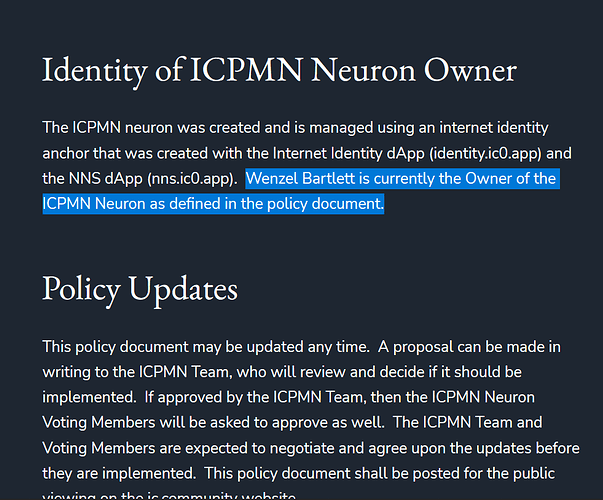 Nothing to see here folks

Also, here are the preceding two paragraphs that you conveniently cropped out of your screen shot from our public policy document that tell a very different story from what you are trying to present…

When the Manage Neuron features are implemented in the NNS dApp, control of the ICPMN neuron will be transferred to a group of people. At that time, this section will change and a different policy on election frequency will be adopted.

Anyone can become a named neuron to start making proposals. We can block names neurons that abuse their power.

I’m baffled so many are proposing “solutions” which only make the governance experience clunkier and more centralized: increase rejection cost, timeout neurons if a proposal is rejected, limit proposals to named neurons, etc…

I’d understand if there were no other way, but much better and more holistic solutions have already been proposed, @skilesare’s ReProposal: Spam Prevention - Convert from system-based rewards to voter based rewards and @wpb’s Periodic Confirmation of Neuron Followees eliminate the spam’s financial incentives, so the only problem left to be solved is advertisement and malicious content being posted on the NNS, which would be fixed by adding a “spam” button as a voting option, many other DAOs use the same solution, e.g on Cosmos you can: accept, reject, abstain or report spam (called No with veto). Implement these 3 features and you have a much better NNS experience than with anything proposed in this thread.

Seeing as this is a thread on how to stop potential advertisement spam, I don’t think a move from $70 to $700 will affect advertisement spam, advertisement budgets are significantly higher than $700. So the real affect will be to suppress individuals who can’t afford to risk the money, and this goes away from decentralization. This will have no impact on whales and companies from coming in and advertising on the NNS, if anything it will clear it up so only they can afford to advertise.

Also if this is such a big risk and threat to the NNS then I feel like the priority of an actual code fix should be moved up to pri 0 by the Dfinity team and not left to the community hacking together a “fix” that doesn’t fix the issue.

Maybe we can implement auto decline from certain neurons. And I can just always auto decline @ysyms everytime.

My final submission in regards to the NNS, rewards, dead neurons, activity and spam.

Reading the many discussions put forward over a long period of time I have a proposal that I hope meets all the concerns brought forward from the past to current that I feel need to be addressed.

The first point to consider is about neuron holders. There seems to be 3 types of owners that have focus.

Any neurons added to the NNS have decisions made about the level of rewards due to the quantity of icp and the length of staked time that they will receive for the owner. This should be upheld as any class action or court decisions may be at the cost of the voters on the NNS and not Dfinity.

This would apply to Dead, Inactive and Followers neurons.

Any extra rewards should then be given to the Active neurons.

The Followers list should only have groups that are approved by the active neurons and to Dfinity approved groups to update the NNS.

The NNS should have a link to this forum for nominations and discussions put up for changes to the Followers List and NNS updates for Active neuron holders to participate for extra rewards.

This is achieved by conversing on discussions and voting by Active neuron holders that are in the category of Governance. Voting power would apply as per the structure set out in the NNS and a neuron settings for investment return.

Governance discussions allow active neurons owners to put up discussions and would have a voting scale that when the levels of 75% has been achieved or as stated by the NNS the votes are transferred to the NNS for updating without further voting.

Any spam would have to come through the forum and I would assume that spam would not produce a result and be rejected.

The default cost of a rejected proposal on the NNS set to 1 billion so any hacks would fail and all updates for the NNS by the Approve Followers List must also come through the Governance discussion but all Follower neurons votes must be included in the voting.

As for the argument about a resubmit of the owners neurons to Follow after a set period must be avoided.

This is my suggestion to fix the spam concerns but to include all the issues raised to get all active neurons involved with their concerns included.

This is my read on all the topics on this subject over time and I have bundled it all together as a possible solution not the rule.

I like your idea. I wonder how much work it would take to implement. There could be an NNS proposal to block named neurons from submitting proposals (perhaps with a timer), which would ensure it is “hard” to block a neuron and the majority of the governing body agree they should be blocked. This idea might be a good discussion in a dedicated forum topic since it is not aligned with this proposal. If this feature were implemented, it could make it practical to decrease the proposal reject fee.

This is obviously a bad idea. You may just make NNS more centralized.

which would be fixed by adding a “spam” button as a voting option, many other DAOs use the same solution, e.g on Cosmos you can: accept, reject, abstain or report spam (called No with veto). Implement these 3 features and you have a much better NNS experience than with anything proposed in this thread.

I’ll point out that the need to mash the “spam” button is only an issue if the vote counts for rewards. It seems to me that in an ideal world the spam proposals won’t count…if we have a way to keep them “hidden” until we have to deal with them then we can do this. Maybe we still need a spam button, but with Proposal to restrict rewards qualification to a threshold we might not(depending on the threshold we pick).

I do not agree with this statement that a good proposal will pass and bad ones will be rejected. I have seen a very bad proposal passed. Proposal 48623 was to evade tax, for a limited number of individuals, and was not benefiting the IC network at all and it passed. 48623 was a spam to my interpretation of spam, the worst spam seen so far that have the potential to harm the network much more than all the others we have seen. That will happen when IRS will be stepping in. 100% convince it will happen.

Personally, I am going to vote for the proposal made by @skilesare mentioned above. I think that a temporary solution might not be needed when we have a few solid long-term solutions available, and they will make the user experience more enjoyable.

You are right. Maybe I am wrong. But maybe I am right too. Only time will tell. Some proposals will take some time before being proven wrong or right.
As much as I follow the SEC and IRS stance and evolution on cryptos and rewards, I can only think that this was a bad proposal that may put some investors in a bad situation with their taxes. Again, time will tell. But we cannot deny that there is an important risk. If this happen, it will create a crisis for sure. Not to FUD but being realistic. Don’t play with IRS or SEC. Their stick is much bigger and hit much harder than our.

One thing for sure, that proposal was not following Dfinity guide on proposals which one criteria is the need to benefit to the IC. That proposal is not benefiting the IC. It benefit some, and only some, individuals and Dfinity foundation, not the network.