@ulan Do you plan on submitting a proposal for this, or is this still lower priority than other projects?

We are working on a proposal to group canisters first. The proposal of ICQC will come after that.

I personally don’t like option 1 and would rather have what @nomeata proposed, one of the selling points of IC’s subnets is they are transparent to devs, if we go with option 1 that would no longer be the case.

Thanks for the input @Zane! Since each option has its own disadvantages, I think the community will settle this by voting.

Did we ever get a chance to vote on an ICQC proposal?

Did we ever get a chance to vote on an ICQC proposal?

Sorry not much progress on ICQC itself. @bogwar is working on the canister groups proposal, which turned out to be much more difficult than we anticipated. Option 1 depends on the outcome of that.

I am currently working on the deterministic time slicing. Other people who could help with ICQC are busy with the BTC integration. Once both projects ship, there will be faster progress on ICQC.

The plan is to release ICQC incrementally:

After gathering feedback here and in the Scalability & Performance WG session, I’ll prepare and submit a motion proposal with the ICQC roadmap.

Thanks for the update

no support for replicated execution

I might be missing something, aren’t queries already not replicated? Does it mean we can only use ICQC to serve data to users and not to get data from another canister and then run replicated logic on it?

I thought they only pass the certificate through along with the data, at what place do they go through consensus? Maybe it’s the “but not in an update context” part that explains that, although I’m not sure what it means.

True, I mixed that up.

What’s a certified query though? Is there any writeup on the idea or is it the concept discussed here

Intro Hello, everyone. I’m working on ways to enable data certification in ic-stable-memory library. I want to achieve a flow, when a user puts data into a stable collection and it just gets automatically certified, so later the user would ask for the data and receive it alongside the authenticating certificate. During past couple of weeks I was reading and thinking a lot about different ways of data authentication on IC and came to a conclusion that for now there are only two options: to u…

Where are you quoting from?

Pasting the contents of the document here for better readability. Background The Internet Computer (IC) has two types of messages: updates and queries. As shown in the table below, queries are fast because they are read-only and don’t have to go through consensus. Update Query State changes persisted

Hi folks. In preparation for the NNS proposal I would like to share our current understanding of the problem. The main change since my previous post about the trade-offs is that we no longer think that [async/await] conflicts with [replicated mode] because supporting replicated execution for ICQC seems feasible (even though very difficult).

A message on the IC can be executed in two different modes: replicated and non-replicated. The following table summarizes the differences between them.

Sidenote: there is a third mode that currently exists as only an idea: run non-replicated execution on at least n/3+1 nodes. This mode is known as certified/secure/repeated execution.

Canisters have two types of methods: updates and queries. The following table summarizes the differences between them.

The second property - query isolation - is crucial for reasoning about ICQC. It means that state changes made by one query are not visible to the other queries. The property currently holds trivially for queries because they are read-only and discard all state changes after the execution.

Our goal is to allow a query method to call other query methods of the same or other canisters. Let’s refer to the new queries that have this ability to make calls as “ICQC queries” and to the existing queries without calls as “regular queries”.

What makes ICQC queries really challenging to implement is that they combine the most difficult properties of regular queries and updates as shown in the following table:

In the following sections we discuss each of these properties in detail.

Query isolation means that effects of one ICQC query execution are not visible to other ICQC and regular queries. To see why this property is important, consider the following valid ICQC query that calls another query and then destroys the state of the canister.

Other queries should work without any problems after this ICQC query finishes.

In general, if we have a call graph where nodes are canisters and edges are queries, then canisters will be cloned as many times as the number of ICQC query edges in the graph: 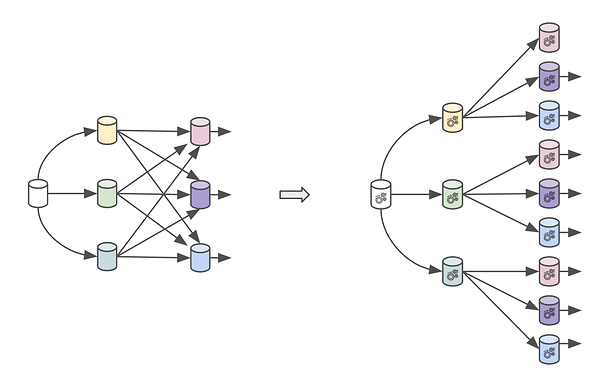 Currently the replicated state contains each canister exactly once. Conceptually we can think of it as a mapping from the canister id to canister state: [CanisterId → CanisterState].

In order to support replicated execution of ICQC queries, we need a way to keep multiple versions of the same canister in the replicated state. This means that our mapping becomes something like [CanisterId → CallContextId → CanisterState] where CallContextId corresponds to an ICQC query with pending calls.

To implement this, we would need to change the core components of the IC such as the state manager, message routing, and execution. That would be a large engineering effort (1 - 2 years) with a lot of complexity and unknowns.

In order to support cross-subnet calls, we would need to rewrite the existing prototype implementation to use an asynchronous/distributed algorithm to traverse the call graph. That is a medium to large size engineering problem.

Our recommendation is to release the existing prototype implementation as a new ICQC query type without the support for cross-subnet calls and replicated execution and then work on those two features separately. The new query type ensures that we don’t break the existing queries that may be used in replicated mode.

A draft of a motion proposal describing this plan will be shared soon.

Why can we even call a queries in replicated mode? Shouldn’t it be up to the canister controller to decide be specifying either a query or “normal” function?

Shouldn’t it be up to the canister controller to decide be specifying either a query or “normal” function?

Absolutely! The owner of the canister decides whether a method is a query or an update by annotating it correspondingly in the Wasm source code: queries are exported as canister_query <query_name> and updates as canister_update <update_name>.

That’s said, it is possible and sometimes useful to run a query in replicated mode. The query still keeps its query semantics in the sense that it is still read-only and discards state changes, but the execution happens on all nodes of the subnet. That means that the result of execution goes through consensus and is signed by the subnet key, so the result is more trustworthy compared to non-replicated execution.

Another case when a query runs in replicated mode is when an update method calls a query method.

But can the caller trigger running a query in replicated mode?

I posted the draft of the motion proposal about the new query type and releasing the prototype implementation here:

This proposal has been extracted from the long discussion in Inter-Canister Query Calls (Community Consideration). We will present and discuss it in the upcoming session of Technical Working Group: Scalability & Performance on October 20. Composite queries Background & Problem statement Canisters have two types of methods: updates and queries. In contrast to updates, queries are not composable. In other words, a query cannot call other queries. This limitation makes it difficult to build scal…

Thank you for the excellent write-up!

Once this canister cloning feature is built, does that mean it will unlock the possibility for a broader change in async/await semantics for update calls? For example, update calls currently commit canister state whenever they initiate an inter-canister call (to either a query or update method). That limitation can be quite troublesome for canister developers, as they need to worry about state rollbacks and non-atomic update methods.

If this feature lands, am I correct in assuming that limitation could (technically) be lifted?