According to Kyle’s predictions, if ICP prices fall below $3.5 USD, the incentives for node providers will likely cause ICPs to enter a death spiral.

ICP prices are approaching this dangerous boundary due to the depletion of liquidity and loss of confidence in the crypto market.

Therefore ICPL.app urgently calls the community’s attention to the reward parameters for node operators, the proposal’s demands include：

This proposal does not have enough design details yet, mainly to wake up everyone in the community, and hopefully DFINITY will work with the community to solve the problem.

No, I think you are misquoting @Kyle_Langham. His post states very explicitly:

Please note the not in the sentence. I think he just used $3.5 as an example as it seemed very low from when he wrote the article. Three important aspects:

We of course need to monitor the situation. But there is no emergency.

Why Nodes Op or whales have to pay for low price? Why not all of us? If we do something we have to do it together not only one entity.
I will vote no to any proposal that is not fair to all comunity.

Only my savings are in a death spiral. The Nodes providers are probably market manipulators. It’s logical they keep a low price to accumulate more. They have money in everything, they don’t care about quick money in ICP. They prefer accumulate low thanks to spiral inflation, gain more power and control on the network with more token, and when they will have enough power, they will make it pump. It could takes years. However, for sure, they will not let ICP to 4$ if the entire market pump.
Look at Etherum, Dogecoin… These fully controlled crypto are those who pumped the most. I’m not sure if I should expect that whales who associate their wealth with control will send ICP to the moon to save the liberty and democracy… More the price is low, more they got ICP, and more they got ICP, more they can sell ICP… and more they sell ICP, more the price goes down… It’s like the Dollar, everyone become more poorer, except those who control it… They print, they use, they print, they use… and us, we watch the value of our assets decline. More of that, market manipulators don’t make pump crypto that a lot of people love. I remember how much they said doge was a scam… or remember EOS which was the crypto with the most investors… Look where is EOS now. The boats never leave full in crypto. Lot of people are wrong thinking it should have more marketing about ICP… I’m sure that less we are to invest in, better it is… This is how I understand crypto market. People like us have no power to influence the market.

objective and specific investigation is required
How do we fully trust kyle?
Current node reward format is killing us

The impact is a very small

I added that so it’s clearer

I put it wrong… I edited it sorry, the % is still small

Hi @blockpunk, thanks for your forum post and the conversation you are kicking off. I encourage you to continue the conversation and attention you are raising towards reward parameters, but I would also encourage that conversation to occur outside the context of a “node rewards death spiral”. DFINITY, including myself, do not believe this to be a likely outcome. As @bjoern correctly points out, the conclusion of the referenced article is contrary to the belief that a $3.5 price would trigger a death spiral. In addition, the referenced article was written prior to my joining DFINITY.

Moving forward DFINITY will continue to publish the inflation and NNS report on a monthly basis. I, of course, welcome feedback on that report structure from the community to help refine the report into a more useful tool for the community. A key metric to monitor in that report, for anyone concerned about a death spiral, is the absolute number of ICP minted for node rewards each month and whether it is increasing at an unsustainable rate. 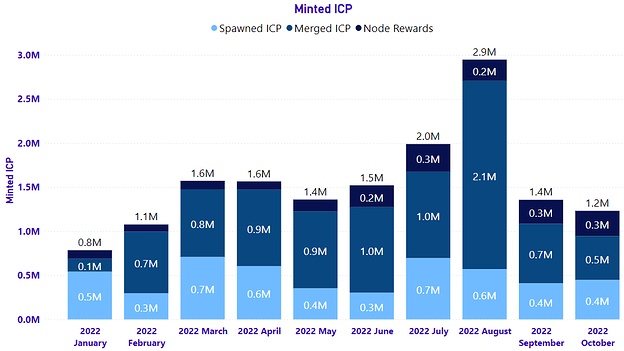 At the time @Kyle_Langham wrote the first of his two posts regarding a death spiral, an ICP price of 3 USD was considered extremely unlikely. Now, we are almost there. Everyone hopes it will not go much lower, but there is no telling. If a token can fall 99.5%, it can certainly fall 99.9%. At some point, node rewards do become an issue.
I would therefore suggest that:

I do think it would be wise to have a plan in place in case of an emergency situation, as we have seen multiple of these types of situations playing it in 2022.

I did a back of the envelope calculation of ICP sales in the month after genesis. By those rough numbers, around 90 million ICP tokens were sold between May 10 and June 10 at an average price of 166 USD per coin, totalling 15 billion USD.
We do not know how much Dfinity sold because lawsuits prevent them from telling us, and it is uncertain if they would have revealed it even in the absence of lawsuits. But there is little doubt that the Foundation was among the biggest beneficiaries of whatever manipulation might have been done by SBF and others.
The biggest losers have been all those who bought after genesis. Almost without exception, they are substantially under water. That is at least partly because the Foundation has wildly missed its announced deadlines for crucial upgrades.
All of which is to say that Dfinity bears at least some responsibility for the lamentable price action, and obviously has the capacity to help remedy it to a degree. The plan I suggested will not involve any loss to Dfinity in the medium term, because it is almost a given that the price of the coin will be much higher than it currently is, unless a death spiral takes hold. I see an emergency programme of countering node reward inflation as a win-win for everybody, would like to hear counter-arguments.

All of which is to say that Dfinity bears at least some responsibility for the lamentable price action, and obviously has the capacity to help remedy it to a degree.

It’s extremely likely that icp could drop below $1.25; and not even slightly unreasonable to expect below $1.00. And I’ll spare you all the worst case scenario, not sure how long you’ve been in crypto. What is the contingency plan should this highly probable scenario play out very soon?

-please note this price action isn’t even accounting for increasing inflationary pressure from node operator rewards resulting from decreasing price. Factoring that in makes a “death spiral” not just an understatement, but an absolute mathematical certainty.

Is it likely that will be under a dollar I don’t know but we need to have discussions around contingencies to ensure that a death spiral doesn’t occur under the worse case scenario.

How about a floor of $1 where if ICP falls below that, rewards are calculated as if it were $1 and not below it

I believe Dfinity can and will protect ICP from this threat. At $1 the market cap would be low enough for the Foundation to repurchase as necessary. This would consequently limit decentralization for a time.